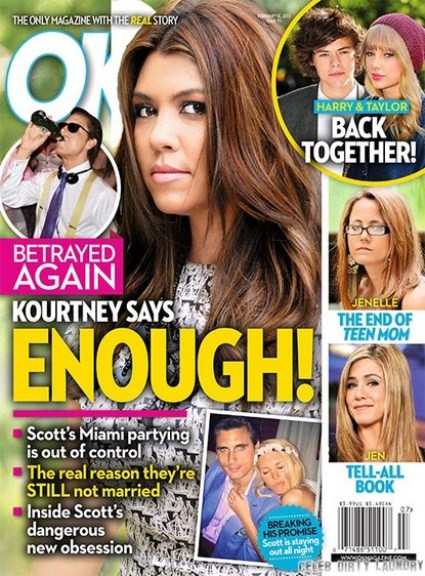 It’s almost as if Kourtney Kardashian is on the payroll over at all of the recent tabloids because she and her sisters are always featured prominently. Are they getting a cut of the magazine’s sales? One has to wonder considering we’ve never heard anything about any of them being sued by these nitwits.

Once again, Kourtney has been “betrayed” by her boyfriend and babies’ father, Scott Disick. We have no doubt that he is some sort of cretin, but seriously with all of these so-called betrayals, you would think Kourtney would’ve told him to GTFO already.

OK! magazine reports that Scott’s partying in Miami is out of control. In addition, the tabloid reports on the “REAL” reason that Kourtney and Scott have not yet tied the knot. Also featured in this issue is Scott’s “dangerous” new obsession. What could it be?!? Someone say he’s obsessed with crack, because I’d totally start watching their stupid shows. Ha. No such luck, right?

Are you believing all of these stories of betrayal? Hit the comments and let us know your thoughts!