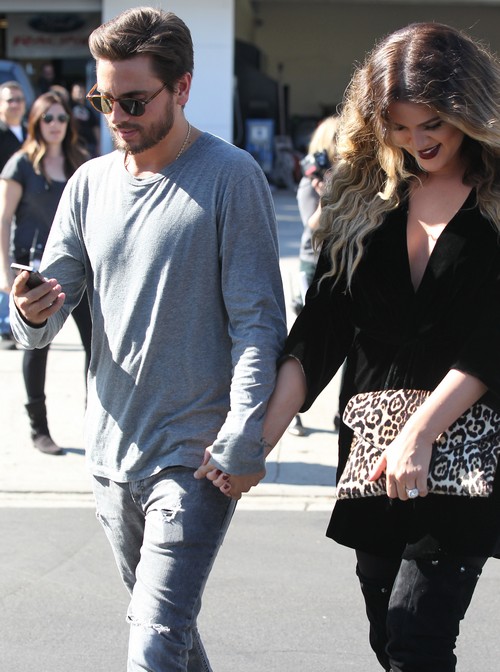 According to the latest headline from Star Magazine, Kourtney Kardashian is furious at Khloe Kardashian for getting too close to her de facto husband, Scott Disick. According to sources, “Khloe and Scott have made a game out of shocking onlookers with their touchy-feely behavior. And while Khloe may see it at all as a big put on — and a harmless escape from her troubled marriage to Lamar Odom — Kourtney is growing increasingly upset and embarrassed.”

You know, Scott definitely comes across as the skeeviest member of the Kardashian clan, which is saying a lot. I mean, the fact that he takes his underage sisters-in-law out drinking and partying says enough about his lack of maturity. The source adds that this is also another concern of Kourtney’s, explaining, “It’s been a regular thing for Scott to leave Kourtney with the kids and go out partying with Khloe. She thinks they’ve crossed the line. But Kourtney is finally putting her foot down. However, Scott keeps telling Kourtney that she shouldn’t mind him partying with Khloe because Khloe is family. But Kourtney isn’t buying it.”

Well, if Scott and Khloe are genuinely getting ‘touchy feely’ with each other, I would say that’s a cause for concern and Kourtney better put a stop to it asap. But then again, who really understands the twisted relationship dynamics of this family? I was always under the impression that all the sisters and their husbands have swapped partners at least once, and I also wouldn’t put it past Khloe to keep flirting with Scott – maybe less to make Kourtney angry, but definitely to make Lamar jealous. But I do agree that Kourtney seems to have a problem saying no, considering that she’s by far the sanest member of the family. She seems like she wants to spend quality time with her husband and children, not embroiled in idiotic gossip. But she can’t say no because she doesn’t have the guts to stand up to all of them.