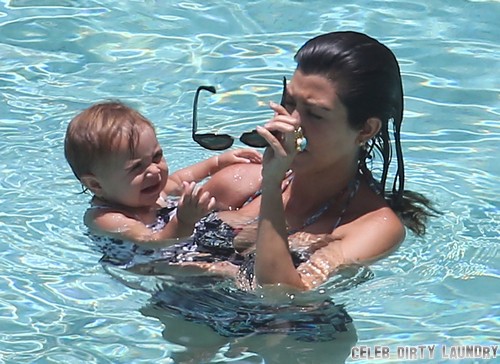 Penelope Scotland Disick wasted no time establishing her little image in her first two-piece bikini! Refusing to let her little cousin North West steal all the shine, she shocked a Miami pool wearing a tiny animal print string bikini. While some people thought she looked adorable, others felt it was a classless way for Kourtney Kardashian to steal attention away from her niece, and violent bullying brother-in-laws (Kanye West and Lamar Odom).

According to HollywoodLife, Penelope would look cute in almost anything, but a tiny triangle bikini top in animal print fabric seems best left to one of Penelope’s aunties. Even if Penelope has some serious diva style already, we’re not sure if such a small bikini is best!

Penelope is a gorgy wittle baby, and she’ll likely have the fashion swagger of her media mogul mom, Kourtney Kardashian, and her Ken Barbie looking dad, Scott Disick. She will never, however, garner the same media fascination as North West. The royal heir to Prince William and Kate Middleton won’t attract as much attention. That’s a good thing for both Kourtney Kardashian, and Penelope, because North West will wear the beefy chains of fame forever. Considering the ongoing reputation of the infamous Kardashian family, you have to wonder if Kourtney agreed to the baby bikini, or if momager, Kris Jenner demanded it for more stardom.

Let’s pray rumors of ending Keeping Up With the Kardashians are not true! Kim knows that she’s talentless, so what (who?) else could she possibly do for a living? I’m sure Kris Jenner is overbearing, and the family’s sitting on a gazillion dollars, but there is no one better to keep up with. We wanted to see Kylie and Kendall grow into surgery addicts, and watch North, Penelope, and Mason grow into mad spoiled adults.

Kourtney Kardashian spends the day with her family and friends at the pool in Miami, Florida on July 22