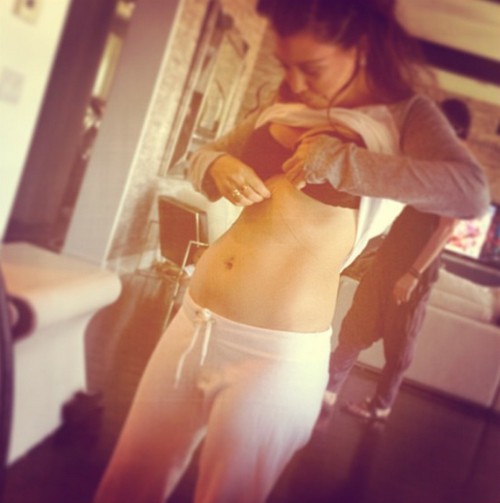 Scott Disick, like the subtle man that he is, decided to post a picture of his wife’s bare belly, with the caption ‘Looks Like An Angel’. Why? Well, some people think it’s because she’s pregnant.

This would mark Kourtney Kardashian‘s third baby IF she really is pregnant, even though all I’m noticing is a flat stomach, not a baby bump. Granted, she’s not just showing her belly in her picture, but also her bra. So either Scott’s trying to comment on his wife’s body, or they’re trying to show us Kourtney’s weight gain to signify her pregnancy. Only, I think they’ve been away too from real people too long. Most would just consider that a great body, not one indicative of a pregnancy.

So, either Scott’s comment about ‘looks like an angel’ could be referring to his wife himself, or it could be about the baby. Kourtney is looking down at her stomach in the picture, so there’s option a) she’s pregnant, option b) she’s showing off her body, and then c) Scott and Kourtney are being famewhores as usual, and they saw an opportunity to capitalize on the media frenzy surrounding their family, which is at all-time high due to Khloe Kardashian‘s situation with Lamar Odom and Kim Kardashian‘s new baby.

What do you guys think? Is Kourtney actually pregnant? Is that tiny bump on her stomach supposed to mean she’s pregnant? Is Scott just trying to show off his wife’s body on Instagram? Are they trying to steal the attention away from Khloe and Kim? Let us know your thoughts in the comments.