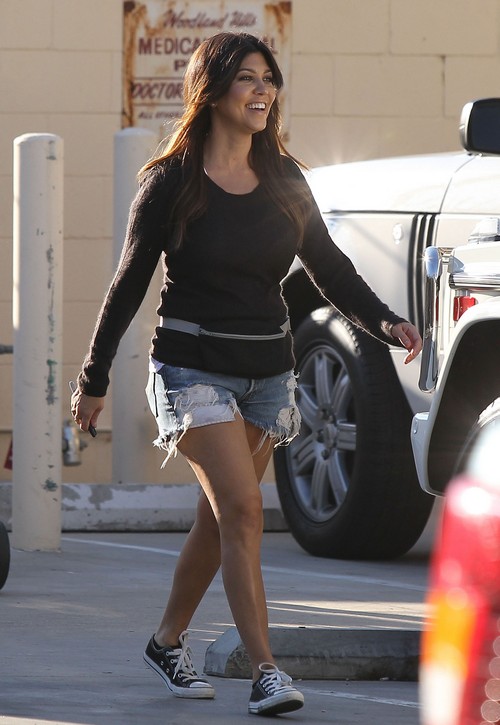 Are Kourtney Kardashian and Scott Disick expecting another baby? According to a report from OK! Magazine, Kourtney might be pregnant.

A source tells OK!, “Everyone’s buzzing that she’s already in the very early stages of pregnancy because she’s totally glowing right now. She’s got a lot of the same things that happened with [her previous pregnancies]. She’s gaining weight in the same places and has a puffy face. She and Scott both want a third baby, so it’s really possible already.”

Kourtney and Scott already have two kids, Penelope [Disick] and Mason [Disick]. Both are fairly young, so it’s actually surprising to see that Kourtney and Scott are already looking to add to their brood. But then again, they do have help and nannies, so it’s not like they’re doing the majority of the grunt work.

Also, Kourtney and Scott have both expressed their desire to have a large family, with Scott even saying that he wants an ‘entire soccer team‘. I’d like to think that both of them are slowly plotting their escape from the larger Kardashian household by having more and more kids, and then using that as an excuse to avoid family meetings. But then I remembered that both Kourtney and Scott love being famous, and they would never do that.

What do you guys think about Kourtney’s possible pregnancy? She hasn’t physically put on much weight that hints towards another pregnancy, but she could just be covering up her baby bump with loose clothing. If this report is true, Mason and Penelope could have a new baby brother or sister by the end of next year.