Scott Disick’s Return To Alcohol Abuse: Kourtney Kardashian Intervenes to Save The Drunk 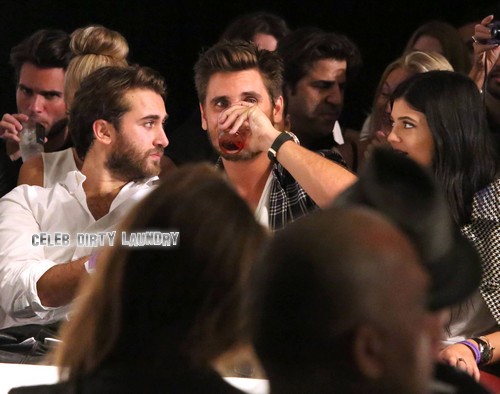 Losing a parent is never easy and many try to cope the best way they know how. Sometimes that can be the worst possible thing, just ask Scott Disick. Shattered by the loss of his 63-year-old mother Bonnie Disick, he reportedly has taken up the bottle again.

The Keeping Up With the Kardashians cast member and Kourtney Kardashian’s significant other, has been inconsolable since his mother’s death. So much so, that he’s turned again to his favorite vice: alcohol. In a recent episode Scott appeared drunk at sister-in-law Kylie Jenner’s Sweet 16 birthday party.

RadarOnline is reporting that his failed attempt at sobriety has Kourtney frightened for the father of her two children Mason, 4, and Penelope, 16 months.

Kourtney has always struck me as levelheaded, so rather than condemn Scott for his weakness, she has been offering her full support for her grieving man. But her compassion has its limits considering Scott isn’t a very nice drunk. During an episode of KUWTK, he punched a mirror during a drunken tirade and Kourtney had to flee clutching Mason in her arms.

They were the united couple at his mother’s funeral in Long Island. But deep down, Kourtney must know Scott has to get a rein on his demons, or they will destroy the happy family they present to the cameras.

While this writer has yet to suffer the loss of a parent, she knows it must be unimaginable pain. So my condolences go out to Scott and Kourtney. Gather yourself by your bootstraps, man! You have children you have to raise and you can’t do that feeling sorry for yourself! Life does go on in your beautiful children. Dwell on that!