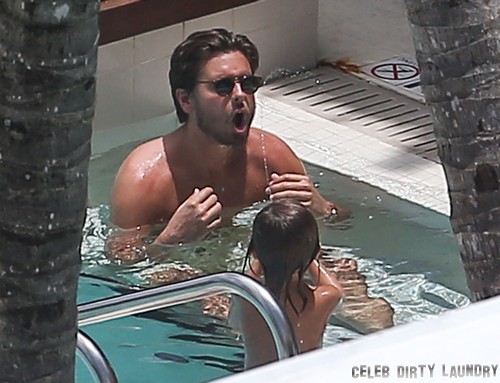 Earlier today Kourtney Kardashian and her 100 per hour sperm donor, Scott Disick revealed they took a DNA test to prove and once and for all that little Mason was their son instead of Michael Girgenti’s. Well fast forward to now and you’ll find that despite Mason proving to be Scott’s, the money hungry Michael is still insisting he’s the father.

“We don’t trust the results and believe it could have been fixed,” a spokesperson for male model Michael Girgenti told Radar.

And hate to say it but he does have a point. No, I don’t believe he’s the father and yet I don’t trust no home ordered DNA test. If Maury has taught me anything is that women be faking these things all the time. Why should Kourtney Kardashian be any different? Sure she no longer wants Scott for anything more than baby-making; still even if she simply picked his name out of a hat to be her baby daddy then she will of course she’s going to fight to keep him.

Frankly the only person that should be doing the test is a court ordered professional. Even as I understand why the Kardashians would simply do anything to get rid of the model. Michael Girgenti is just too shady. If anything, why go to the press all the time with all of your stories. Does that seem like what a man fighting to see his son should focus on. Are the paparazzi and tabs following Kourtney around going to hand him Mason. Wait is that a No! Oh my god I’m so shocked.