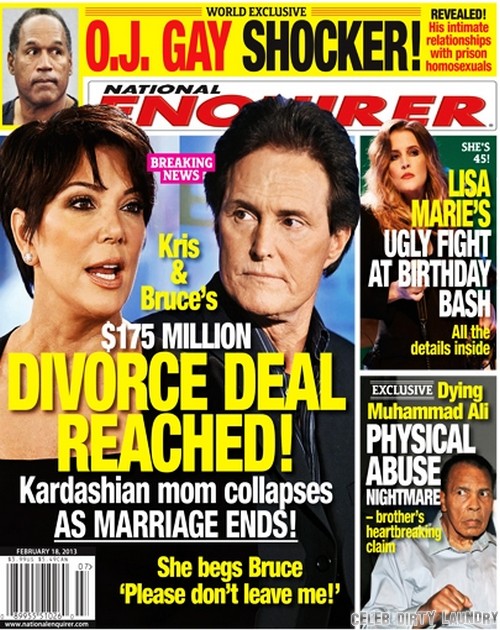 The National Enquirer is pushing forward with a report claiming that Kardashian matriarch Kris Jenner and her husband Bruce are divorcing. There have been a lot of rumors floating around that Kris and Bruce were on the rocks, but the tabloid is reporting that the high-powered couple have already worked out the terms of their divorce settlement.

A lot has been said recently about Kris’ ability to act as a half-way decent mother to her pimped out children, but apparently Bruce has really had enough of her nonsense. We would be getting out of that, too. She’s got a face like the Joker and she has to sell everything and everyone known to man to make that almighty dollar.

The tabloid reports that Bruce and Kris have already reached a $175 million divorce deal. Kris was said to have collapsed as her marriage hit the rocks. Even better, she has been begging Bruce not to leave her. DO IT BRUCE!

What do you think of all of the divorce rumors surrounding these two? We’re pretty sure where there’s smoke, there’s fire. So stay tuned to CelebDirtyLaundry for all of the latest as this story unfolds!