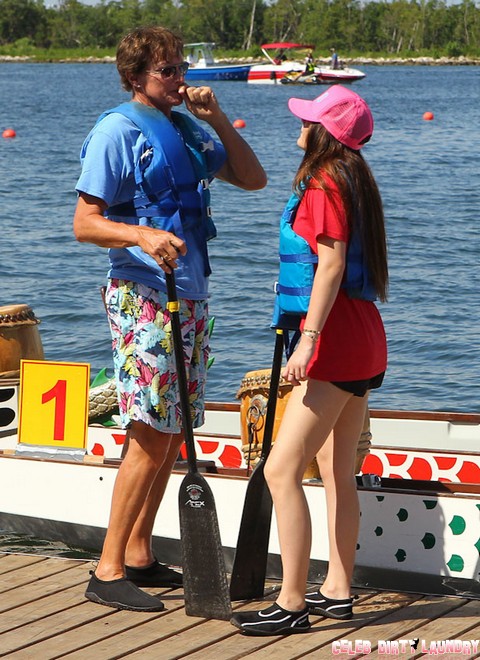 Another day, another divorce rumor for Bruce Jenner and his charming wife, Kris Jenner. The National Enquirer is saying they have the latest on the ongoing battles in Bruce and Kris’ marriage trouble. There is a chance they will finally file divorce papers this week after over a year of divorce rumors. The Jenners have been denying there is trouble in their relationship since 2011.

The magazine is reporting that Bruce is threatening to expose the details on an affair Kris had in the late 1980s. The event he is referring to is Kris’ romp with Todd Waterman and that it was a three way encounter with OJ Simpson’s then living wife, Nicole Brown Simpson. Bruce will expose all the sordid details unless he gets a huge financial settlement from Kris.

Why would a rich former Olympian who rakes in millions every year through speaking engagements and reality TV demand money in a divorce? Why not just run away from the humiliation Kris puts him through on their reality show, Keeping Up With The Kardashians? The answer is Bruce learned a thing or two from the momager over the years and knows everything is for sale. Bruce wants hush money. Although the Jenners and Kardashians put so much of their lives on television every celebrity has their secrets. Bruce was emasculated during his entire 21 year marriage to the Calabasas Dictator, which you can clearly see on the show. He had no power in the marriage but has finally found a way to have the upper hand.

Bruce is also threatening to talk about the secrets of his step daughters Kourtney, Kim and Khloe Kardashian. When the news leaked that Kris brokered a deal for Kim’s sex tape my suspicion is that Bruce opened his mouth. This was just a taste of what he could do to Kris. The woman’s actions regarding her children are absolutely outrageous. Kris was furious that Kanye West announced Kim’s pregnancy for free during his concert on December 30, 2012. She had a deal lined up to make several hundred thousand dollars but Kanye blew the deal. Perhaps Bruce was inspired by Kanye to finally stand up to Kris.

Bruce has expressed his concern that his daughters with Kris, Kendall and Kylie Jenner are working too much. He feels the girls are not spending enough time in school and with friends. Kris will listen to no one. On a recent episode of Keeping Up With The Kardashians the Jenner girls were upset with Kris for not letting them be home schooled. Kendall and Kylie argued they are very behind on their school work because they have a lot of modeling jobs and cannot study while working. You see Kendall trying to read in the makeup chair but the makeup artist won’t have it. He can’t do up her face while she is looking down reading so he takes the book away, putting it on the floor and scolding Kendall. Kris told the girls make it work. She left the problem up to two teenaged girls instead of taking responsibility for her children. That 10% commission means more to her than her children’s education. The girls are sort of on their mother’s side of this issue. They express that if they can’t be home schooled they need to work less. I can understand making as much money as you can because their fame may not last. But come on, Kris! You preach about the importance of family but your actions don’t follow your words.

Kris is Bruce’s third wife. I was thinking maybe Bruce picked the wrong women but after seeing him in action on TV I see he was probably the problem in his marriages. Bruce could not get anything out of his two previous ex-wifes to soothe his ego, but now that he sees he can get revenge on Kris I think he is feeling validated not just about Kris but all three of his wives. The thing is his two girls with Kris are under age 18 and Kris could ask for child support. If she gives him the settlement he wants I doubt a judge will let her ask for child support. And given the fact that the girls and Kris make millions of dollars every year she may not be entitled to child support anyway. Knowing Kris she will want alimony, too. Kris will try every trick she can think of to get money out of Bruce anyway she can. The money thing between these two is going to be very complicated if they divorce. Get a good lawyer, Bruce. Kris the dictator will probably dish on your secrets, too, and fight for every penny she can keep.