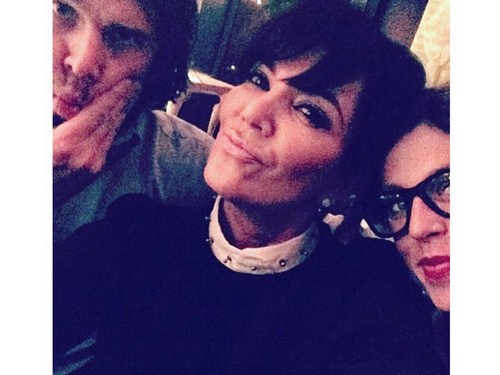 Despite Ben Flajnik‘s strenuous denials that he’s not dating Kris Jenner, all the evidence points to the contrary. Kris Jenner posted an Instagram photo of herself and Ben getting close, titled ‘Date night with Ben and Liz’.

Look at Kris, manipulating the media. She’s left it open to speculation by including this Liz person in the picture, but she titled it ‘Date Night’ knowing that it would stir up conversation. We know you’re dating Ben, Kris, you don’t have to play coy about it.

But maybe it was Ben’s requirement? I mean, the guy didn’t deny the rumors just to have it come back and bite him in the ass. Maybe he told Kris he would date her as long as he got some publicity out of it, but that there couldn’t be any ‘official’ confirmations of them dating.

And Ben even managed to cover it from all angles. Why are they spending so much time together? According to his comments, “She’s a beautiful, smart woman. Kris is a very, very dear friend of mine. We are not dating, we’re just working on a couple of projects together, so that’s why we’ve been seen a lot as of late.”

Right. A couple of ‘projects’. About what, exactly? Kris doesn’t really have a career, apart from running her own reality show. What project could the much younger and much less business-savvy Ben help Kris with? It could be that when he said projects, he meant his career advancement project and Kris Jenner’s public boyfriend project. That, I could believe.

What do you guys think of Ben and Kris being spotted together so often? Ben’s definitely getting his fifteen minutes of fame out of this relationship, and Kris continues to get the bonus publicity. Who actually believes they’re NOT dating? Unless he’s just around to help her change her Depends. Bruce used to take care of that but he’s busy writing his tell-all now. Let us know what you guys think in the comments.