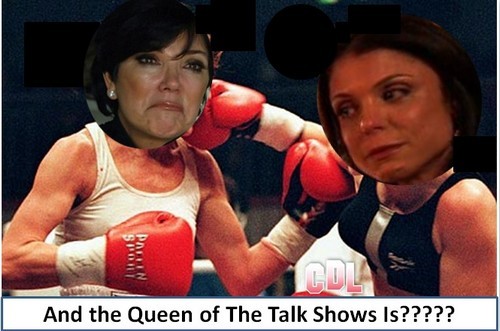 What happens when you have Kris Jenner and Bethenny Frankel both launching talk shows aimed at the same demographic? Exactly what you’d expect, ugly fighting over everything behind the scenes. Kris Jenner has turned the whole Kardashian brand into an empire to be reckoned with. She counts Ryan Seacrest and Kathie Lee Gifford as two of her closest friends and she certainly isn’t going to settle for second tier guests when her show premieres on July 16th on FOX.

Bethenny Frankel is a powerhouse business woman that is often accused of putting work ahead of everything else. She’s worth millions and has Ellen DeGeneres co-producing her gabfest that will debut in early September.

According to the July 8th print edition of In Touch magazine the ladies were nice to each other while working the room at the Daytime Emmys a few weeks ago, but don’t let that fool you. It’s ugly between them. They are fighting over guests because neither host wants to share so anyone they lock in also has to agree NOT to do the rivals show. They are also working overtime to secure big Hollywood names that will be promoting films this fall.

Neither woman is without their drama. Bethenny is going through an ugly divorce with Jason Hoppy and the details have turned into tabloid fodder. Then there’s Kris who is matriarch for a dysfunctional family. She’s not Hollywood’s favorite person thanks to the way she chooses to capitalize on every moment of her children’s lives. She is viewed as more opportunistic, less talented in the eyes of many A-listers.

Will you tune in to watch either of these ladies chat it up? Who do you think will have a better go of it? Kris seems to be taking aim at Hollywood guests while Bethenny wants to focus on issues you’d discuss with your girlfriends. Tell us which one you think will come out ahead in the comments below!