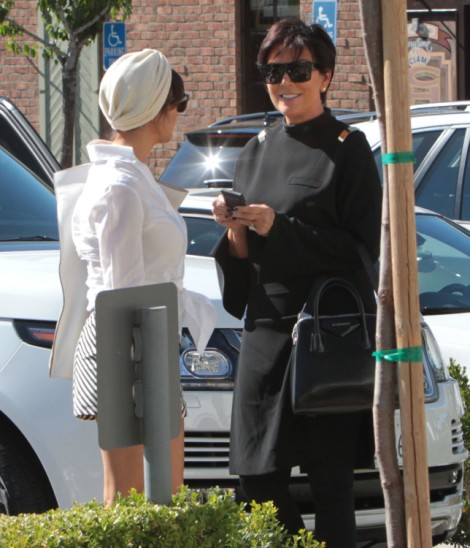 First off, can we talk about Kim Kardashian’s first pic post baby? Bitches please! We all know that was posed, right? Who sleeps with all that make-up on when 1) you’re at home nursing a newborn; and 2) you’re SLEEPING. So this is how the Kardashian PR machine is going to play this. Slowly but steadily Kim (but more importantly North West) is going to make her entrance. They’re going to attempt to keep it classy – or as classy as Kardashians can be. There will be no pics all over twitter – yet – and no instagram pages and definitely no unveiling on Kris Jenner’s new talk show.

TMZ reports Kim put her foot down over the idea that her child would go on daytime TV for her big debut. North West is way too good for that. She’s going to have nothing less than a tabloid cover. And it looks like $2 million may be the asking price. Apparently, Kim has already been offered that much but she’s still deciding and/or playing the magazines off each other for more money. But if you think that cash is going in NW’s trust fund think again. Source say Kim’s all about pulling a Brad and Angie and intends to give the money to charity.

Not surprising, right? You show me a person out there who actually thought Kim and Kris were going to keep the  baby off the tabloids for a few years and I’ll show you a naive dumb ass. This is what these people do. It will be photoshopped and people will eat it up. Let’s just follow the paper trail on the whole charity thing. I’d like to make sure that actually happens.

So which magazine is offering the big bucks? Not sure. My money’s on People. That’s probably the least offensive route. Wouldn’t it be hilarious though if it was Star magazine? Would new, mature, natural mom, Kim be able to turn down the money if the highest bidder was one of the 2nd tier smut rags? It would go against her nature but Kanye would have to intervene. Taking the money and running is one thing, taking it from Star or In Touch or Life & Style is quite another. This is a battle between Us magazine and People for sure. Who do you think will win the North West magazine cover?