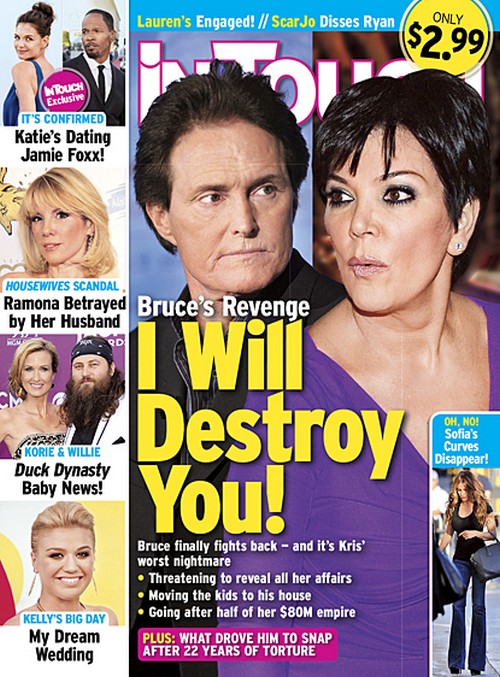 Never ever piss off the nice guy. It’s a rule to live by because once you cross him, it’s all over with and apparently, Kris Jenner is about to get a crash course in this very lesson. Bruce Jenner is tired and done with everything. He may have to honor his contract and show up on their fake reality show but that doesn’t mean that he has any intention of keeping Kris’s secrets any more. Bruce also realizes that if he lives a normal life when not filming this show is going to end anyway because it is obviously all fake and people will stop tuning in.

Behind the scenes, according to the Oct. 29th print edition of In Touch, Bruce is ready to come clean about everything. He is ready to purge himself of all the secrets and lies that he has kept in order to protect Kris in the court of public opinion. He also has made it very clear that he wants Kylie and Kendall Jenner with him and I suspect they’ll agree to that as well.

In other words, after being pushed around for 20 years Bruce is finally fighting back and I suspect he’ll win this war because there is no way that Kris will want him to talk openly to the press! What do you think the final straw finally was? What made Bruce decide that he had enough of the daily garbage that Kris creates?

Also inside this issue – are Katie Holmes and Jamie Foxx dating? He claims they aren’t which is what he kind of has to say since he is close friends with her ex husband, Tom Cruise. But she has been spotted leaving his Trump Soho Hotel early in the morning after overnight play dates so something is going on here! Do you think they are dating? Tell us in the comments below!