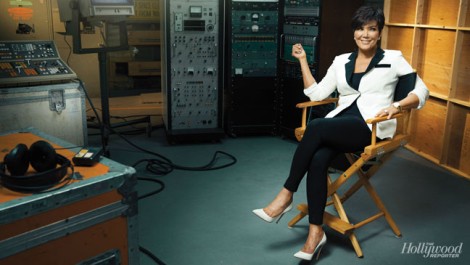 If you’ve read me for awhile you’ll know that I don’t hate Kris Jenner as much as so many others do. She’s harmless. Did she famewhore her kids for millions? Oh sure. But since when is opportunism such a bad thing? Christ, this is America after all. But perhaps what I like the most is the fact that she continues to be unapologetic. She’s turned sex tapes, face lifts, fat scandals and quickie divorces into lemonade and the public wants more. And she’s aiming to please. Will you watch the new Kris Jenner talk show?

Personally, I don’t see how it can work unless she talks about her family the entire time. And that seems to be the marketing strategy at the moment. In an interview with the Hollywood Reporter, Kris Jenner opened her books about just about every ridiculous rumor out there. I can’t believe she let the interviewer ask her some of these questions but she answered.

Here are a few:

Does Kanye West think Kim has gained too much weight? “It’s an absolute fabrication. All you have to do is look at Kim. She’s absolutely gorgeous.”

Did Kim have plastic surgery while pregnant?: “No! The reports that she’s had anything done while she’s pregnant — it’s so stupid. I just wish people would use their head.”

I don’t understand why her people allowed the OJ Simpson/Khloe Kardashian question. That seems like it should have been off limits. I kinda wished she wouldn’t have answered it. By answering it she encourages the discussion. By answering it she gives it life – even if she denies it. It’s like Kanye denying the cheating scandal. Isn’t it too ludicrous and too unbelievable to deny? I always think there’s some truth when people bother with a denial. But I’m a cynical biotch like that.

Kris goes on to say she hopes to be an inspiration to women out there finding success later in life. Hell, works for me. I’d love to find a rich lawyer at 17, get knocked up with cute kids, marry an Olympian, make millions off their f-cked up LA lives and host a talk show. Why not? Why hate? Inspirations come in all shapes and sizes after all….

Below are pis of Kris hanging with Jonathan Cheban a couple days ago in LA. What is Cheban’s game? First he’s Kim’s best friend and then he gets an invite to Kanye’s birthday party and now he hangs with the matriarch. He’s like the Becky Sharp of reality television.