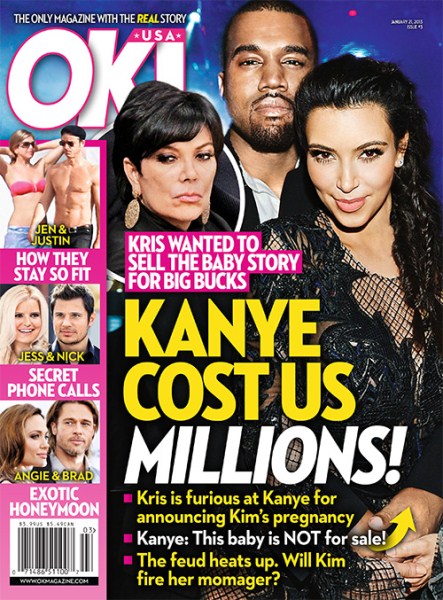 Kim Kardashian is expecting a bundle of joy, but Kris Jenner is one unhappy mother because she can’t put a price on her latest grandchild’s head. Not if Kanye West has his say and the world knows that Kanye is not one to hold his tongue. OK! is reporting in this week’s cover story that Mama Jenner is upset that Kanye spilled the beans about his bundle of joy without even getting paid for it. Rather, she was denied a hefty pay day for the exclusive when Kanye told a crowd at one of his concerts to make some noise for his “Baby Momma!”. It was a touching display in its own way and the rapid fire response on Twitter gave the Kardashian’s complete autonomy over the spotlight, but the glow is starting to fade again. Justin Bieber is a pothead, Taylor Swift is single again and Mama Jenner doesn’t have a bank statement worth millions to flaunt her daughter’s relevance.

While Kris and Kanye battle it out for Kim’s soul over whether or not to put her baby on sale, OK! also gives good copy to Jennifer Aniston and Justin Theroux. A few weeks ago, the tabloid was trumpeting that Jen was pregnant with twins. Now, they’re sharing all the secrets on how she and Justin stay so fit. Either Jen needs a halo fitted around her abdomen for snapping her body into shape after a one month pregnancy or maybe she was never with child after all. One really has to pick up the latest edition to find out which.

Of course, no magazine featuring Jennifer Aniston on their cover would be complete without the obligatory mention of Brad Pitt and Angelina Jolie. Brangelina are apparently planning an exotic honeymoon. Yes, the two are still engaged after all this time but most couples usually like to take their time to make sure that they’re in it for the long haul. After 7 years, the two really shouldn’t be rushed into such a commitment; deciding between chicken and fish is a very hard choice to make.

Last but not least, Jessica Simpson and Nick Lachey are allegedly playing phone tag with secret phone calls. It sounds ominous but more likely than not, they’re marrying off their kids. Just because it didn’t work out between Maxwell and Camden’s parents doesn’t mean they aren’t destined for a happily ever after.