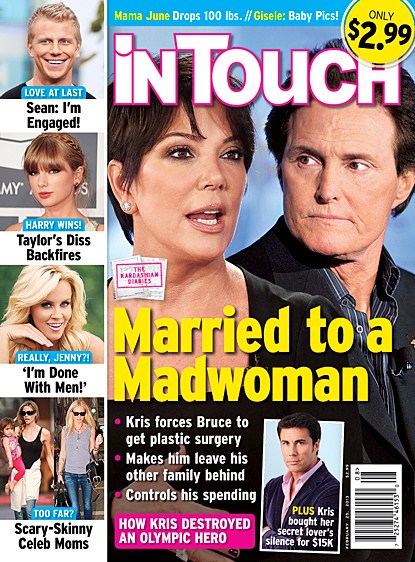 Kris Jenner isn’t content to let her daughters be the stars in the ongoing melodrama they call lives. She will have a starring role in the dysfunction and if the latest In Touch is to be believed, the momager is suddenly press shy and is willing to pay to keep her antics from public consumption.

“Married to a Madwoman” is the blaring headline of this week’s In Touch and the accompanying article narrates that Kris cheated on Bruce Jenner with former soccer player Todd Waterman. If the name sounds familiar, she was also accused of stepping out on her first husband, Robert Kardashian, with Todd. There’s always a rush for seconds when it’s good, but as a supposedly happily married woman who has built an empire image, Kris has to protect her and is alleged to have paid Todd off to ensure his silence. $15K, paid through an appearance on her reality TV show, sealed any loose lips.

“Last year, Kris persuaded Todd to appear on Keeping Up With the Kardashians. It was her way of paying him off and making sure he stayed silent about their torrid past,” an insider close to the Kardashian family tells In Touch.

Kris has denied being a serial cheater, but she’s not the only one mired in relationship problems. According to the magazine, Taylor Swift is at a loss for songs to write since her “diss” to Harry Styles backfired. There’s also the suggestion that “Harry wins!” It could all be much ado about Taylor warbling in a British accent at the Grammy’s while singing ‘We Are never Ever getting back together’ but the real victor is Jake Gyllenhaal. Taylor has replaced him with a new target to throw her lyrical bows at.

Speaking of love crashing and burning, Jenny McCarthy tells the tabloid that “I’m Done with Men!”  If this is her way of playing hard to get ahead of Valentine’s Day, the ploy just may work. Jenny doesn’t seem like the single lady type. She may have written men off after dating Jim Carrey and publicly trashing him afterward, but that’s no reason to take a Taylor Swift song to heart and damn every other guy.

Bachelor Sean Lowe seems to be more in tuned with love songs than bitter anthems as he’s happily engaged. He and the winner of his reality TV search for a bride are planning on getting married this summer. In case the personalized invitation gets lost in the mail, we’ve set our DVR’s for the special date.