Kristen Stewart Considers Herself Single, Ready To Move On And Date Other Guys 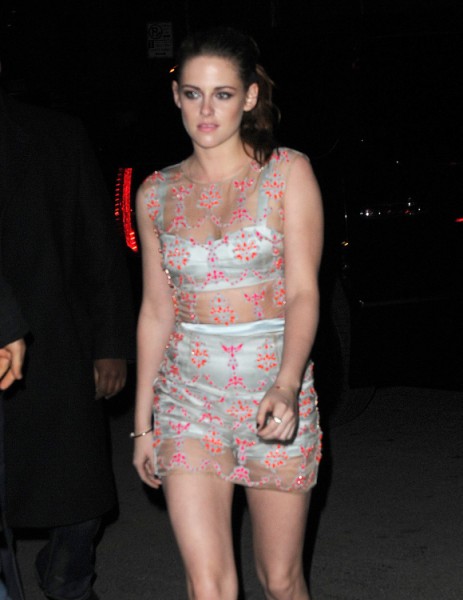 Everyone wants me to just break down and admit that Robsten is over. I’m not being stubborn, really, but I just haven’t heard any compelling evidence to make me really want to throw out all of my Twilight posters yet. There have been plenty of punch my face stupid stories out there involving dirty underwear and armpit licking and Liberty Ross hook-ups but I just can’t get on board. Could Kristen Stewart and Robert Pattinson be that catty and immature after everything that’s happened? Probably, so let’s look at the latest nonsensical nonsense.

According to new reports Kristen is so tired of Rob keeping her on the back burner she’s telling people she’s single and ready to mingle. Apparently she’s done apologizing for holding tight and making drowsy with Rupert Sanders and wants someone who wants her – just as she is (Oh Bridget!). I’m down with that. Can you imagine wearing a scarlet letter in a relationship? I don’t care how much counseling you do, that shit’s hard to overcome.

So who do you want to see Kristen move on with (if this is true and I’m not saying that it is)? I keep hearing reports wanting to pit Kristen and her new co-star Jim Sturgess together. She does have a history for co-stars and I do love me some Jim Sturgess but I’m not feeling it. For one thing he has a girlfriend (although there is talk that could be done). Now, I know that hasn’t stopped Kristen before but I think it’s pretty serious. I remember hearing rumors that Kate Bosworth tried to get with him when they filmed 21 together but he wouldn’t bite. Maybe he doesn’t like girls who don’t like to eat but it could be more of a case of he just really likes his girlfriend.

But this is all conjecture! Is Kristen Stewart single? I just don’t know! What I do know is I’m getting bored of this whole thing. Discussing who Kristen should date next has been the most fun I’ve had while writing about her in awhile. Maybe she should move on. I bet girlfriend could use some excitement.