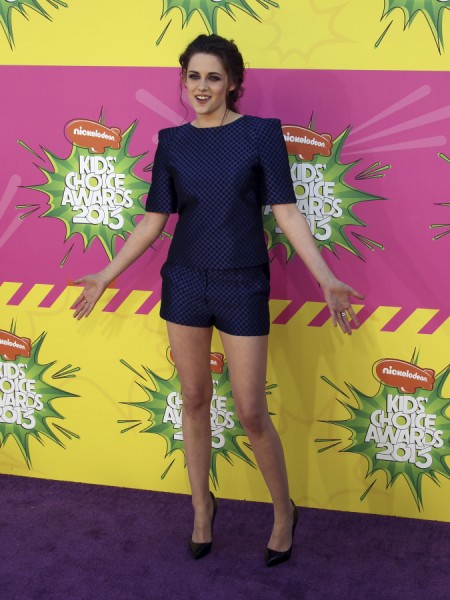 Kristen Stewart has been doing her damnedest lately to convince us that she’s not been spending most of her time huddled up in a ball in her room with her Edward action figure listening to Katy Perry albums on repeat. She’s gone solo to a wedding, been out and about smiling with friends and, despite that little meltdown in the parking lot, appears to be moving on post Robert Pattinson split. Her career looks like it’s going in that direction as well. According to the Hollywood Reporter the actress just signed on to film two new indie projects this year – Camp X-Ray and Sils Maria.

She’s not wasting any time either. She starts Came X-Ray in mid-July. In it she plays a young soldier who is stationed at Guantanamo Bay where she forms an unlikely bond with one of the prisoners. She’s taking a more supporting role in Sils Maria. She’ll star opposite Juliette Binoche and Chloe Moretz in the film which deals with an aging actress grappling with her fading star in Hollywood.

So Kristen’s busy. Great, right? Nothing like work to keep your head on straight. But could this be more? Sources have said that one of the reasons Rob called it quits to begin with was because he was tired of Kristen’s LA scene and her apathetic views towards scoring more roles. She wanted to chill for awhile and live her college years whereas Rob was all about the couple focusing on their post-Twilight resumes. Sure looks like Kristen’s following his example now. Could this be a sign to him she’s ready to get serious again about her future as well as their future together? Couldn’t hurt, right? That’s assuming she even wants Robert Pattinson back. Am  I one of the few out there who wants to see her move on?

What do you think about the indie films? Kristen Stewart could do worse post-Twilight. Christ, have you seen Ashely Greene’s filmography?