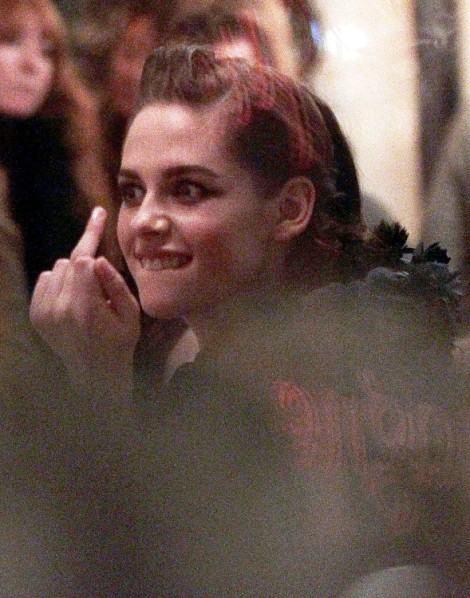 Oh, my old friend, I feel like it’s been ages since we’ve seen each other last. There’s nothing like a good Kristen Stewart middle finger post. She loves to flip off the paparazzi… or anyone that’s pissing her off at the moment. I’m sure she’d flip me the bird if she had the chance. But that’s why we love her, right? Kristen Stewart flips off the paparazzi. It’s her thing. It’s what makes her so adorable and lovable. Without that awesome gesture of power and insolence she’d be just like all the other boring young starlets like Jennifer Lawrence and Emma Stone with their boring oscars and boring stable franchise relationships. Kristen Stewart’s middle finger reminds us that she’s a rebel! Haven’t you heard? Oh, and that she’s probably not taking this Robert Pattinson split as well as her people would like us to believe.

Paparazzi found Kristen with a friend in a Hollywood parking garage yesterday and she kinda had a mini meltdown. She started flipping the bird all over the place. She changed positions. She used both hands. She really didn’t want the paparazzi to leave without knowing exactly how she felt. Message received. But this shouldn’t make her publicists so happy. Her people have been working hard ever since the news broke to minimize the “Poor, sad sack, pathetic Kristen” picture that ran so heavy after her first break up last year. She’s been seen smiling! She’s been out with friends! She’s hanging out with Taylor Swift! These antics might put a damper on that spin.

But, shit, can you blame her? Apparently, there have been whispers that she’s fed up with always being the bad guy in that relationship and that she’s annoyed that Rob always gets off scott-free in the press. Apparently she’s not the only one who might have been playing around on the side. The Rupert Sanders episode didn’t just happen because she was bored one day, if you know what I mean. So, clearly, homegirl is frustrated. I get it. I just wish she could handle her shit a little better. I’m sure she does too. Hang in there Kristen. This too shall pass.