Kristen Stewart’s A Mess After Robert Pattinson Split, Not Showering Or Eating Again 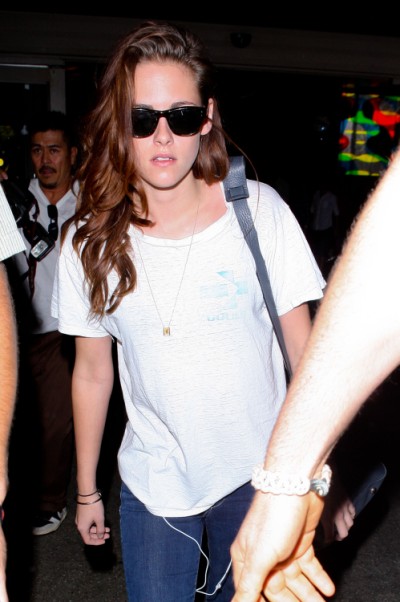 So we’re back to this again, huh? Following the newest Robert Pattinson split, Kristen Stewart has been reverting back to her old post break-up habits. Avoiding sunlight? Check. Chain smoking and living off red bulls? Check. Refusing to shower? Definite check. If you weren’t sold on the Kristen Stewart/Robert Pattinson break up rumors over the weekend then get out your tissues because this might just be a done deal.

Radar Online reports that Kristen has holed herself up in her LA digs with her friends and is refusing to come out. “Stewart, the insider said, has gotten back into the same routine she followed after the couple’s parting last summer, following the revelation of her tryst with married director Rupert Sanders. The insider said the actress hasn’t left ‘her house for days … [and has] surrounded herself with friends 24/7.'”

True it says nothing of red bulls and cigarettes but those were apparently her go-tos the last time she rode this merry-go-round. I just wonder if Katy Perry is with her or with Rob. I’m telling you… something is up there. Rob spends all his time with Katy and now he just breaks up with Kristen all of a sudden. Is this a Brangelina 2.0? It’s way hotter than the Rob/Kristen/Rupert triangle from last year. Katy might be just what Rob needs. She seems a lot less angry, right? And she’s goofy and maybe he needs goofy right now. Three years with Kristen Stewart might be too intense for anyone. But I’m just guessing. I have no idea why these two called it quits. But let’s see if Kristen’s dirty girl routine works this time around. I suppose it did the trick last time….