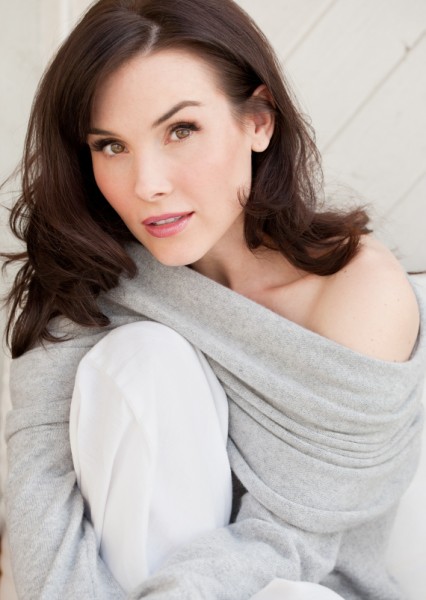 The wait is almost over for all you True Blood fans out there. Season Six is just about upon us and will debut in a couple weeks and Celeb Dirty Laundry had the great fun to sit down Kristina Anapau who plays recurring character Maurella – the beautiful faerie who got busy with Andy Bellefleur in the woods in season four and left him with four babies to look after in the finale of season five.

“I was a fan of the show for sure. So I knew coming in what the faeries meant to the show and I had my predictions of what that would mean in the future. But I had no idea what was in store for Maurella,” Anapau laughed. “I definitely knew what I wanted to have happen and that pretty much happened in the fifth season with the pregnancy and all that.”

Anapau’s character had the opportunity to deliver her quadruplets in an orgasmically fun style on a pool table in Merlotte’s Bar in front of a group of curious onlookers.

That could seem a far reach for Anapau who moved to Los Angeles from Hawaii at 17. She’s a classically trained pianist and ballet dancer and got a huge break when she scored the role of Galina in the Oscar-nominated film Black Swan. Acknowledging the film opened doors for her, Anapau also credits her ballet training with giving her the discipline and focus needed to navigate a career in Hollywood. In addition to her recurring role on True Blood the actress is also looking forward to an exciting upcoming year in film. Two of her movies, BlackJacks and Sighting are currently in post-production. But whether we’ll see her on True Blood again this season is something she’s staying tight-lipped about.

“I can’t say anything about any of that but Maurella was active in the season finale so there’s some unresolved business,” Anapau said cryptically.

If there’s one thing the show does well it’s leave the fans with unresolved business. Season five left us with a a crazed “Billith” looking ready to sink some massive fangs into Sookie and Eric. Pam and Tara may or may not be hooking up. Alcide is a now a packmaster and, oh right, humans are at war with vampires. With all of those different storylines and characters it can be difficult to wrap your head around what’s going on but Anapau says all of the different blood on set is what makes the show so enjoyable for fans and for the actors.

“Out of everything I’ve ever worked on True Blood is probably the most family-like atmosphere on set which is wonderful and makes for a really nice working and creative environment for everybody. I’m sure that’s a huge part of the show’s success. There’s something magical about the show behind the scenes and it’s definitely one of my favorite projects I’ve worked on,” she said.

What plot line are you most interested in for True Blood season six? Be sure to tune in for the premiere on June 16 and tell us what you think!