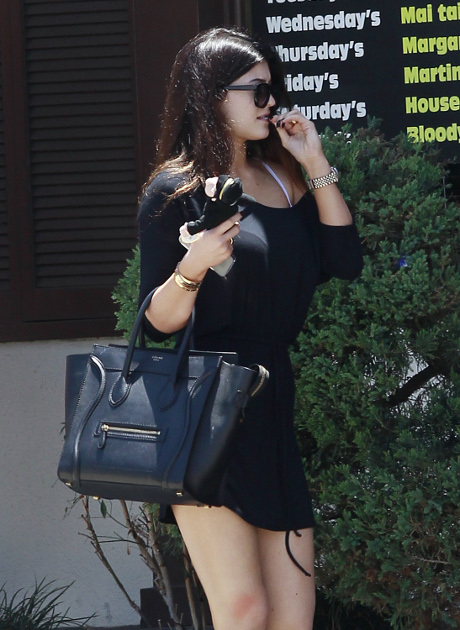 Oh look, another Kardashian family member thinking she’s above the law. Why is this not surprising? According to the National Enquirer, Kylie Jenner has ‘pulled a Cher in Clueless’ and was seen driving illegally. According to state laws, anyone with a learner’s permit must always have someone who’s 25 or older with them at all times. The Enquirer claims that Kylie was with three friends, but there was no one with her that was over 25.

The Enquirer goes on to emphasize the laws, adding, “Kylie can’t drive unless a licensed driver, 25 or older, is present, and is not allowed to drive passengers until one year after she gets her driver’s license.”

Of course, that Kardashian family mouthpiece Gossip Cop has jumped on this report, claiming that they spoke to a Kardashian insider and that they said that Kylie would never drive illegally. This supposed insider claimed that Kylie was probably driving with one of her ‘mom’s assistants’. How nice, the assistant is dragged along with Kylie and her friends every time they want to go out.

No, you know what’s more likely? That Kylie did drive without a passenger who was 25, and she probably does it all the time. As anyone who’s ever lived in LA will attest to, it’s not exactly a place where the drivers follow the laws all that well. Either way, it’s something a lot of teenagers do, but this report will probably give her enough warning that she doesn’t do it again.

What do you guys think? For what it’s worth, driving with a learner’s permit and without a 25-year old passenger is a lot safer than driving drunk, which is something people in LA do with alarming frequency. At least Kylie’s not doing that, right? Let us know what you think in the comments.