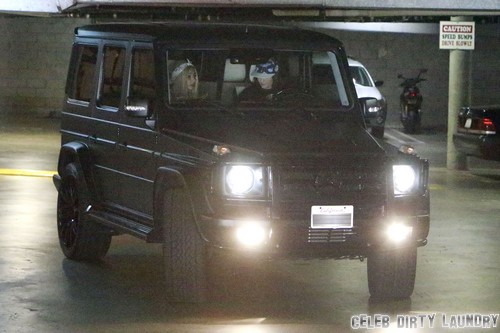 This has to be a celebrity record! Kylie Jenner has been driving for under three weeks and not only does she now have a three-car accident under her belt but she also had the presence of mind to swap information and get out of there before the police could arrive! Girlfriend was driving her $125K Mercedes SUV in Calabasas yesterday when she plowed into the back of a Toyota that then hit another car.

According to TMZ Kylie hopped out immediately to make sure that everyone was okay and then collected insurance information before making a quick exit. The police were called but they arrived after Kylie split leading me to wonder, who was with her in the car. Kylie runs with a rough party crowd and from initial reports there was no attempt to brake to stop this accident. If the cops got there might the youngest daughter of Kris Jenner have been in a bit of trouble?

She has spent the summer at a Malibu beach house with her sister Kendall Jenner and the neighbors have loudly complained about it being a round the clock party. I wonder where Kylie’s good pal Lil Twist was. He’s known for rolling some of the biggest and best blunts on the west coast. Perhaps there were a few stashed under the drivers seat in Kylie’s car and that was one great reason to get out of there fast.

Obviously it’s pure speculation but let’s be real here, this girl runs with a rough crowd, has the means to get whatever she wants and up until now has been bullet proof- meaning she has never found herself in serious trouble. That means Kylie likely thinks she’ll get out of everything if she makes a quick enough exit. Do you think if cops searched her car there would be more to this story? Tell us in the comments below!