Kylie Jenner Wants to Go to Prom with Jaden Smith — But Is He Interested? 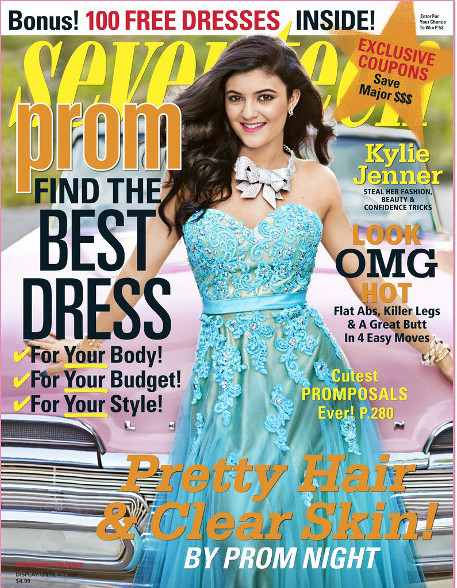 Kylie Jenner really opened up in her interview with Seventeen Magazine, where she dished on her prom fantasies, admitted she’d love to find a boyfriend, and revealed that Kim Kardashian‘s style gives her inspiration. But, honestly, isn’t that a given. Doesn’t Kim Kardashian and her ever-annoying beau inspire us all, forever and always?

In the magazine, Kylie says when asked about fame and its consequences, “Since I was 9 years old, I’ve been in the entertainment business, and everyone is always telling me what – and what not – to do. You just get a tough skin and have to not care about what people think or you will not end up in a good place.”

She says that she doesn’t currently have a boyfriend; she also says that, if she can’t locate one in time, Jaden Smith, one of her best friends, would definitely fit the bill for an excellent prom date. “I don’t have a boyfriend, but I do really want that boyfriend prom experience. I would want to go with someone who’s not afraid, or doesn’t think that he’s too cool, to show up at my house with a rose corsage.

It would be nice for the guy to come over and be respectful and nice while my mom takes prom pics,” she explains. “But if I couldn’t find a boyfriend, I would want to go with one of my best guy friends, like Jaden [Smith]. I know I’d have fun with him – he makes me laugh and he is a great dancer.”

On her style: “I borrow things from my sisters’ closets all of the time. For prom, I’d probably raid Khloe’s for shoes (she has the best shoes!), and Kim’s for dresses and handbags because I really admire her style a lot.”

She also wants girls to know that they shouldn’t be afraid to take things into their own hands. She tells the magazine, “If I wasn’t with a date, I wouldn’t have a problem going up to a guy and just saying, ‘Are you gonna dance with me?’ Trust me, it’ll work for you too! Guys like it when you aren’t afraid to make the first move.”