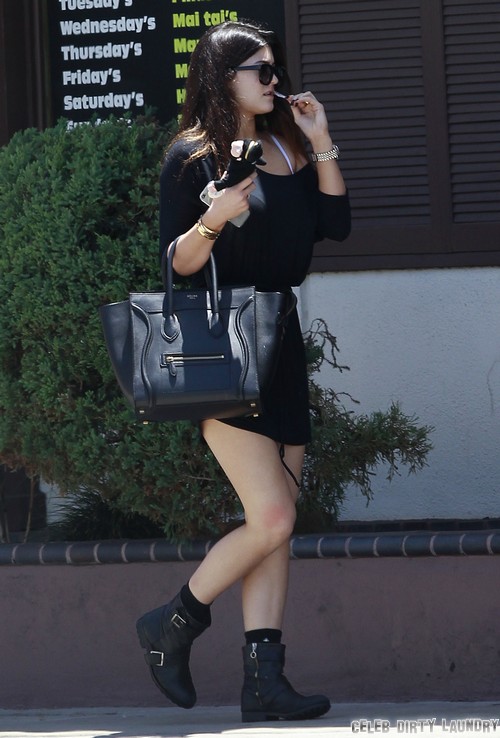 Do you blame Will Smith? I don’t think any legitimate movie star would be happy about seeing their son date any member of the Kardashian clan. Regardless, Jaden Smith is dating Kylie Jenner, seemingly without caring if his father approves or not.

Even though Jaden has been trying to keep his relationship to Kylie secret, they were finally papped holding hands in Calabasas the other day, confirming what everyone already knew. But according to sources, dear Will is not very happy that his son is dating someone who is from such a famewhore family.

He recently explained in an interview that fame for his family was just a by-product of what they do and he insinuated that he disliked other families who orchestrate the media to gain attention, explaining, “So the idea of fame or exploitation or orchestrating the media is sometimes even less than desirable for us.”

He could have been referring to anybody, sure, but he was also asked specifically about other families who live in Calabasas. What other families could this interviewer have been referring to? Well, there’s Justin Bieber – but he pretty much lives alone. And then there’s the Kardashians. Well, there’s also Eddie Cibrian and LeAnn Rimes, but I don’t think that anyone cares about them.

So since he’s made his feelings on the Kardashians clear, is he just playing laissez-faire with his son’s love life? Will has admitted that he has a very friendly relationship with his son, so maybe this is his way of just letting Jaden make his own mistakes. Either way, it’s kind of scary to think about how fast the Kardashians are infiltrating our A-list celebrity ecosystem. Kim has already gotten into the top tier of the music world with Kanye West, and now Kylie has managed to grab onto the Smith family. What’s next? Kendall Jenner with Robert Pattinson? Oh good god, I can’t believe I even suggested that. Let’s hope my prediction doesn’t come true, or the Internet might just implode.