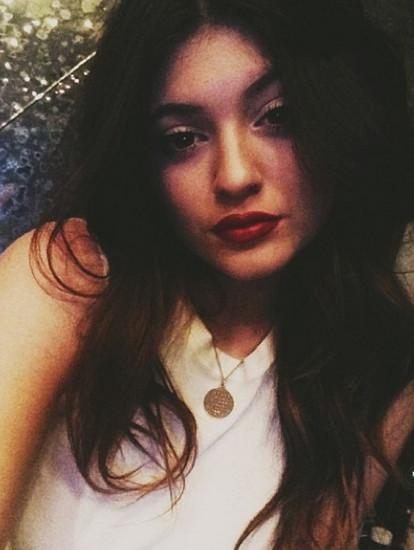 Kylie Jenner released some fairly racy Instagram pics. The photos, which aren’t nearly as racy as her sister’s sexy pic, show off Kylie’s bare abs. In another pic, she photographs her thighs, covered in fish net stockings, beneath her Mercedes’ steering wheel. What do you think about the Jenner girls barraging their fans with sexy selfies? Do you think they and their mother, Kris Jenner, think that this is the only way to pass on the “fame crown” to the next generation?

According to some sources, Kim Kardashian was a bit maddened by the fact that Kris feels the need to “promote” her daughters’ in this way. Of course, Kris probably isn’t behind the scenes saying, “Here, snap this next,” but she certainly isn’t telling her daughters to modify their behavior.

Kylie shared the shots over the weekend. She captions one of the pictures with a lyric from a Beyonce song (as if she has the right to compare herself to the Queen B). “You’re no angel either baby,” she writes, referencing “No Angel” by B.

Check out the Kylie Jenner Instagram photos below and let us know what you think. It’s no surprise someone from the Kardashian household is releasing these kinds of pics . . . . But are they starting to be a bit much — like a desperate plea for attention? (Duh.)