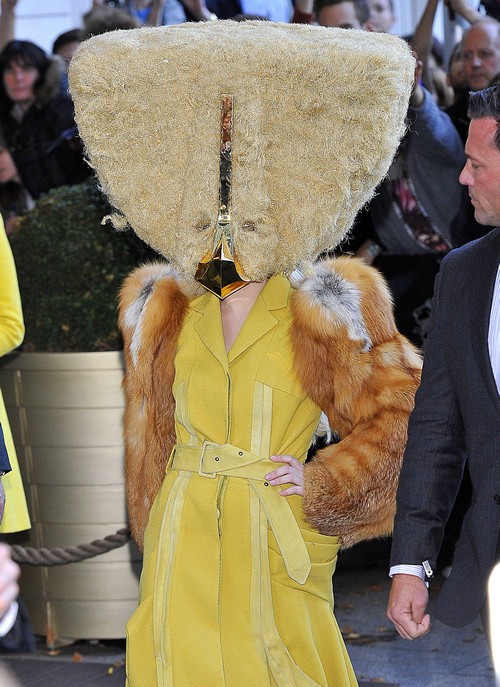 Um, do you want fries with that? This had to be the question Lady Gaga was asked most today. While in Berlin, Germany to promote ARTPOP, it was Gaga’s fashion choices that made international news. Lady Gaga is known for her outrageous, quirky sense of style. That is one of the reasons she’s so fascinating. But her choices today were just bizarre.

As she exited the Ritz Carlton hotel in Berlin to attend a listening party for her album, she looked like a lost McDonald’s McNugget. She wore a huge mask covered in feathers with two eye cutouts and a golden beak. The rest of the outfit consisted of a belted yellow coatdress, black heels, and a fur coat that only covered her arms.

There was a costume change once she arrived to the event. Gaga’s look was lingerie inspired. She wore sheer black tights, a black garter belt, and a matching black bra. She also wore a bulky, floor length fur coat to complete the ensemble. Her bleach blond hair was slicked back and she had white eye make-up. Oh and not forget where she was, she donned a long mustache.

I always applaud Gaga for the artistic risks she takes with her music, live performances, and fashion. I also usually understand the thought behind it and the message she wants to convey. However, sometimes, she leaves me at a lost. She has become a household name now and doesn’t always need the gimmicks to garner attention. I believe her music speaks for itself. I loved the promotional single, “Do What You Want,” featuring R. Kelly. It was received so well, that it was announced that it will be the second single from ARTPOP instead of the planned song, “Venus.”

Before heavily promoting ARTPOP, her choices had evolved into a very haute couture sense of style. She was often seen wearing Chanel, Valentino, Oscar de la Renta, or McQueen. She loves fashion and delivering the shock-factor, but the chicken mask lost me. What are your thoughts on Gaga’s current fashion choices?