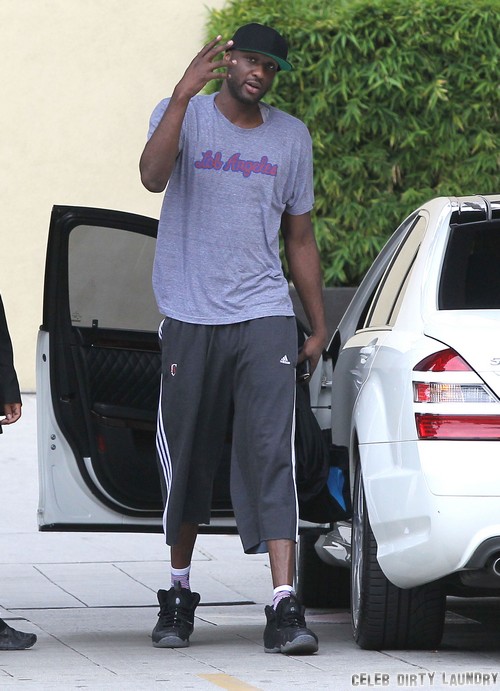 Well, whaddya know. When Lamar Odom went nuts and attacked the paparazzi Thursday, he left a PR mess in his wake. Apparently, that’s not all he left because the pap he attacked is now thinking of pressing charges according to TMZ.

We’ve seen this happen a hundred times before, and it’s never surprising. Of course the pap is going to want compensation for getting his equipment damaged and their car [allegedly] smashed.

For those who don’t know what happened – Lamar Odom was asked about his year-long affair with stripped Jennifer Richardson and whether he would admit to cheating on Khloe Kardashian. Whether he’s guilty or not is up for debate, but Lamar certainly didn’t act innocent when he went all kung fu hustle on the paparazzi and decided to start breaking shit.

According to reports – although the investigation is still ongoing – Lamar damaged the equipment of two phototogs and allegedly smashed one of their cars. Apparently, both the paps have gotten lawyers and are prepared to press charges against Lamar, with one saying that he ‘definitely wanted to see Lamar go down for what he did’.

This whole paparazzi/celebrity issue is a never-ending debate. Yes, the paparazzi mostly suck and they often invade celebrities’ privacy. But that doesn’t give anyone the right to basically attack another person, paparazzi or not, and smash up their belongings. Besides, Lamar couldn’t have made the fact that he was guilty any clearer than that. If he had just stayed silent, people would have eventually ignored the scandal. But by doing what he did, he just ensured that people won’t stop talking about it.

What do you guys think about the paps possibly pressing charges against Lamar? Are you on Lamar’s side or the paparazzi’s side? And do you think that Lamar really did cheat on Khloe with a stripper? Let us know your thoughts in the comments.