Lamar Odom Slams His Father, Joe, On Twitter – Calls The Kardashians His ‘Only Family’ 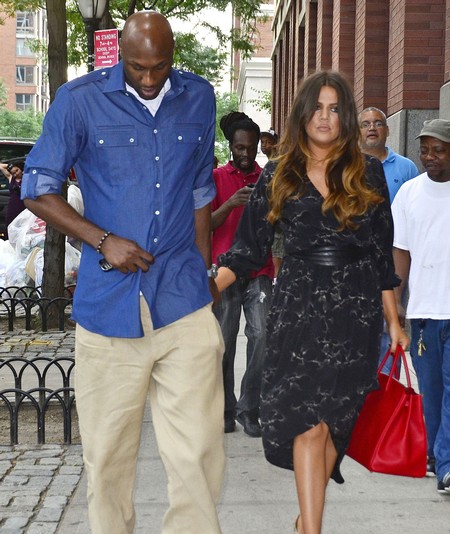 Lamar Odom‘s father, Joe Odom, spoke out for the first time earlier today on Lamar’s drug problems, blaming the Kardashian family for leading Lamar astray. However, Lamar has finally taken to Twitter to clear up some of the allegations his father put forth, and claims that the Kardashians have been there for him way more than his father ever has.

He explains, “Won’t continue 2 speak on this but I have got 2 let this out real quick. I have let this man and many others get away with a lot of shit. He wasn’t there 2 raise me. He was absent ALL of my life due to his own demons. My mother and grandmother raised me. Queens raised me. For the first time since they left, came a blessing of a FAMILY that I married into… He has never met my mother in law and some of my other family. How can a man who has NOT once called me to check on my well being have the nerve to talk so recklessly about his own ‘son’.”

He adds, “He is my downfall! His own demons may be the ONLY thing he gave 2 me. He disrespecting the ONLY FAMILY that has loved me without expecting anything in return. They are the ONLY ones that have been here consistently 4 me during this dark time.”

He goes on to blame himself for the addictions and the problems that have plagued him for the last two years, and he says that he will continue to defend the Kardashians because they have ‘stood by him’ during these times.

It was always obvious that his father was trying to famewhore his way into attention with those comments, considering that he spoke to Radar Online when he could have just picked up the phone and called his son. It seems like he reads the tabloids, just like everyone else, and then makes assumptions based on those reports. Obviously, the accuracy of the tabloids is very hit or miss, and instead of calling Lamar, Joe Odom decided to spill his thoughts to the first person that would listen to him.