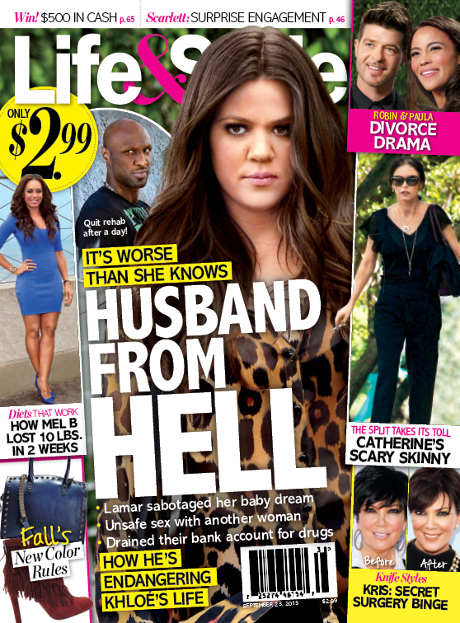 Khloe Kardashian has spent the last twelve months knowing for certain that her husband, Lamar Odom, was cheating with numerous women in between his drug binges thanks, in part, to the work of the private investigator that she had hired to uncover the truth. Perhaps the first thing that clued her in to the fact that her husband was messing around was her own inability to get pregnant. According to the Sept. 23rd print edition of Life & Style magazine, Lamar’s string of unprotected sexual romps put a major hiccup in Khloe’s baby plan.

That indicates that only one thing, that Lamar probably infected Khloe with some random STD that totally interrupted her original mission to have a baby. All of those months of bloat weren’t due to Khloe taking infertility treatments. Instead, she was likely going through procedures to get her body healthy again and, by the time that it was, Khloe realized that rather than have a baby with a crackhead, she would rather just whip herself into fantastic shape!

Speaking of marriages in turmoil, have you taken a good look at Catherine Zeta-Jones lately? It’s pretty obvious that the split from Michael Douglas is taking a toll on her health and Catherine has gone from thin to joining the pinhead club.

Kris Jenner’s 6 week talk show run crashed and burned — thank goodness, but it made her a nice, quick chunk of cash. Since Kris has some time off she has decided to head to her favorite plastic surgeon’s office to freshen up her look. Think about it, Kris has been out of sight for weeks and now we know why!

Anyway, back to Khloe! Do you think her whole quest for a baby was basically a stunt to divert attention away from the real problems in her marriage?