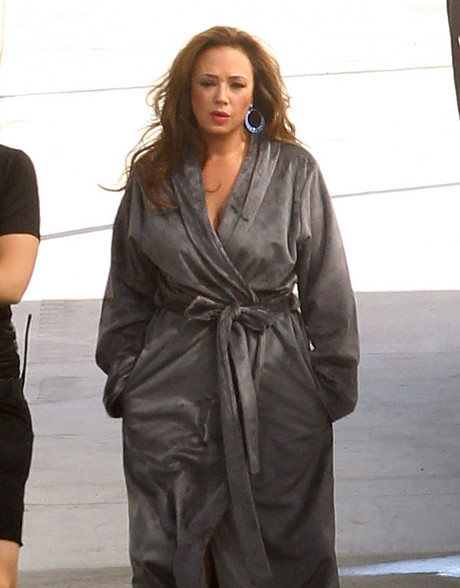 According to a new report from the Enquirer, Leah Remini ‘exploded’ when she learned that the producers of Dancing with the Stars were trying to book Kirstie Alley for an ‘in-audience interview shot.’ This is the National Enquirer, so take it with a grain of salt – but I wouldn’t put it past the producers of DWTS to try to pull off a stunt like this for ratings.

A source explains, “Raging Remini warned execs she will NOT interact with her mortal enemy/Xenu disciple, especially if she visits backstage — and doesn’t even want her sitting in the audience! Leah feels that if Kirstie’s anywhere on or near the set, she’s there to intimidate her.”

The source even adds, “After hearing Kirstie was on the booking lineup, [Remini] told producers she refuses to come face to face with her Scientology enemy — and asked them to make sure they’re never on the set at the same time. She doesn’t even want the pressure of knowing Kirstie’s in the audience.”

I can see this being true, but would the producers of the show really be that blatant? Remini hasn’t exactly held back about her feelings regarding Scientology and everybody around her has to  know that, including the producers. She has hinted towards a more personal beef with Kirstie Alley, especially after Alley tweeted not-so-vague hints about Remini being a defector and untrustworthy.

Scientology members have clearly been trying to wage an intimidation war against Remini, but Remini knows she’s winning. She’s not hiding, she’s not running, and she’s very visible on Dancing with the Stars. And, honestly, even if the producers booked Kirstie on the show, I have a feeling Leah would actually go out of her way to do better that night and rub it in Kirstie’s face.