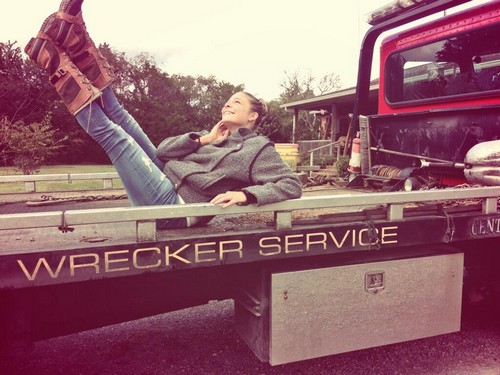 I am not sure how everyone else began their Monday, but I started mine by LeAnn Rimes calling me a “horrific ‘human being’” on Twitter for doing my job blogging about celebrities. I want to begin by thanking all of you on Twitter that had my back, I always knew you were good people, but in this case you were my champions. Thank you!

LeAnn attacking people on Twitter is nothing new, and neither is her lashing out at writers. When a writer posts an article that in unfavorable to LeAnn she does the only thing LeAnn knows to do – try to get them fired. As I understand it she has done this to Ilana Angel of the Jewish Journal, and also to Jenn of Just Say Jenn when she was writing for Yahoo. But seeing as it was a first for me, and it is not every day that I get called horrific and have it implied that I am less than human, I have decided to go all Sinead O’Connor and compose and open letter to LeAnn. So here goes: 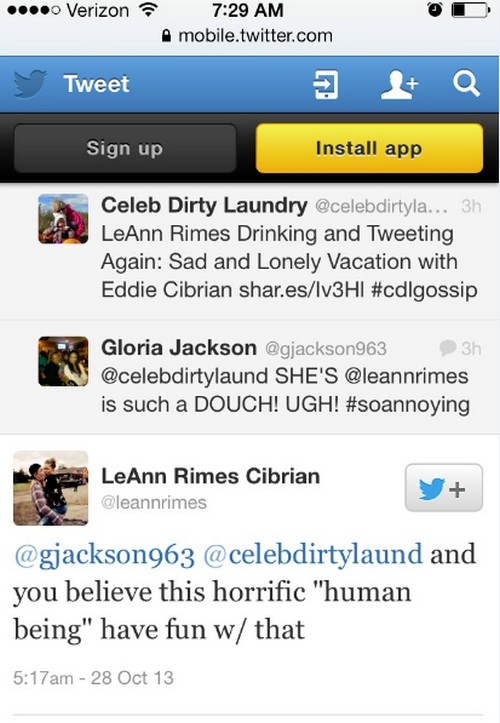 Normally I start out a letter with Dear or Aloha, but I won’t be starting this letter off with any term of endearment, because there is nothing endearing about you LeAnn. In fact you are the epitome of what happens to a person when they are made to believe at a young age that they are better than others, and need not take responsibility for their actions.

I am the writer that you had the audacity to call horrific for simply writing the truth. You also insinuated that my article was baseless lies, when in fact it was taken from your Twitter time line. In truth you practically wrote my post for me, I just tied it all together and delivered it in a neatly packaged gift box for readers to enjoy while catching up with their Monday morning gossip.

What was particularly amusing about you calling me names, is the fact that you align yourself with anti-bullying campaigns and yet felt very comfortable calling a person you don’t know names on the internet. Did you even bother to look me up to find out all the ways I am so horrific – oh shucks that wouldn’t have worked anyway since unlike you, I live my life offline.

In all actuality your jab at me only proved that what I and other bloggers have been saying about you is true, and your lack of self-restraint was yet another example of emotional instability. It also showed that you are a self-entitled celebrity who thinks herself better than others, because even worse than calling me horrific was your use of scare quotes around the word human being as a way to imply that I am less than human. Let me clear it up for you LeAnn – I am a living breathing member of the human race – no need for scare quotes, nothing ambiguous about it. But I am not surprised you did that because as a non-celebrity – or a “never was” as you call us – you deemed me unworthy of the title human being. Do your fans know this is how you think of them – just a bunch of “never was human beings.” Psshhhh and you wonder why your last two albums flopped, and you have been on the list of most hated celebs for several years. Oh and FYI calling writers names, threatening them with C&D letters, and trying to get them fired will not make them turn around and write some BS fluff piece on you, any more than fighting with random people on Twitter is going to win you back fans and public favor.

As for being horrific, although far from perfect I am and will always be a far better person than you. We should have all seen signs of your true colors when you not only sued your father but you mocked him, and mouthed “I hate you,” to him in open court. Thing is, we weren’t really paying close attention to your personal life back then, because let’s face it LeAnn you may be able to sing (although I prefer to listen to artist’s that can actually enunciate when they sing), but people find that you lack charisma, charm, and looks in an industry that caters to the more beautiful. I bet that part was hard LeAnn, and I would feel sorry for you if it wasn’t for all the bad that you have done.

We didn’t really begin looking at you until 2009 when those stills of you sucking a married man’s fingers, while you were married, in a restaurant were released. And honestly my first thought was why would Eddie cheat with her when he has a hot model wife at home. You have to admit it is mind boggling and you probably couldn’t believe it either which is why I think you orchestrated the release of those pictures. I think you did it because Eddie wouldn’t leave his wife Brandi Glanville for you and you wanted to force his or Brandi’s hand in ending their marriage. Come on LeAnn you seem to sue anyone and everyone that you can (even your Dentist as if it was his fault you had bad teeth). If you hadn’t wanted those stills to be released you would have threatened to sue and those pictures would have never made it to the cover of US Weekly. Furthermore you wouldn’t have broken the news to your then husband Dean Sheremet by phone so callously. You would have been distraught and told him in person while crying profusely. In fact you were the opposite of distraught, you were down right happy. When the affair went public unlike most celebs who have their PR put the kibosh on any “rumors,” you wanted us to know that you were sleeping with Eddie. That silly smirk you wore 24/7 back then said it all.

While you were busy smirking, Eddie was calling you a speed bump and was trying to work things out with Brandi, but you couldn’t let go could you. You were obsessed and started to act as if you were stalking them. Hey remember that time you actually cancelled a concert so you could follow Eddie to a basketball game where you conveniently ran into him during halftime at a bar in the Staples Center. And yes you are a homewrecker, even if you weren’t the only other woman that Eddie was sleeping with while he was married, YOU were also married and wrecked you own home – so yes LeAnn you are and always will be a homewrecker no matter how you look at it.

But here is when I really decided you behaved like a  horrific “human being” – when you began taunting Brandi with her kids, acting as if they were your own. They are not your children LeAnn – you will be their stepmother for the duration of your marriage to Eddie – whereas those boys are Brandi’s babies for life. If you love them you would protect them from paparazzi, you would respect boundaries, and you would NEVER speak ill of their mother. You have not stopped talking trash about their mom since 2009 – because you are every mother’s nightmare stepmom. You are lucky that Brandi is in such a good place and has not only been civil but gracious in spite of all the hate you throw at her, because many other women wouldn’t have been as kind.

And if there was any doubts about what a type of person you truly are you went and put the nail in the coffin that is your public image when you called to harass a mother and her daughter, simply because they wrote nice things about Brandi on Twitter, and then turned around and sued them. REALLY LEANN, YOU CALLED AND CUSSED THEM OUT ON SPEAKERPHONE IN A BUSY RESTAURANT, BUT ARE SUING THEM FOR INVASION OF PRIVACY!!!. Yup that’s right I am going all Kanye caps on you right now.

The next thing you need to do is get off of Twitter (or at least take an extended hiatus) and leave it to the mature adults that can handle it. As a public member of social media you have to know that it comes with the risk of having what you post held against you in the court of public opinion – or blogs. You are so reckless on your Twitter that I have actually been able to write quite a few posts just based on things that you have tweeted – that is crazy LeAnn and means that YOU are doing something wrong. It also means tweehab didn’t work.

And in closing, I dare you to let me interview you; but I know you won’t for the same reason you won’t sit for the deposition – you are scared. You are scared to be in a situation where you cannot control the questions and the answers, because despite the front you try and present to the world, deep down you know what you are – and it’s nothing nice. You know it. I know it. And now the world knows it.