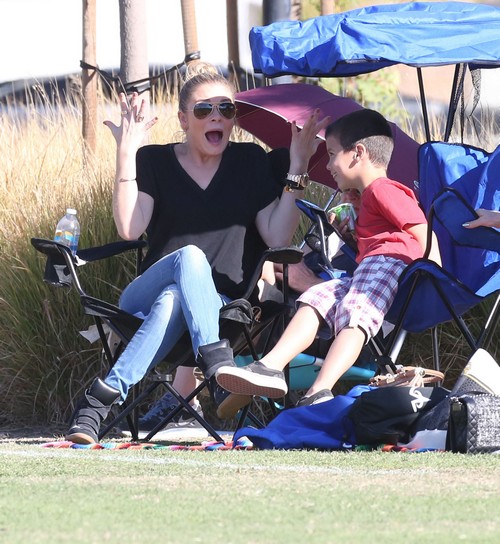 On Saturday LeAnn took Brandi Glanville’s sons, Mason and Jake, to soccer and took the tape off Eddie’s mouth. While promoting his latest movie, The Best Man Holiday, Eddie had been instructed to give Entertainment Tonight this rehearsed statement regarding rumors that he wants to divorce LeAnn because she is a drunk psycho: “[The rumors have] been going on for so long. They’re just absurd, and to give any validity to any of these things, it’s crazy.”

Eddie seemed to deviate away from his given script – likely to LeAnn’s chagrin – when he went on to say, “We have such a great marriage, very functional and we just decided to do a show to screw that all up.” I see what you did there Eddie, you hid the truth in sarcasm. Good one. Now that he mentions it, it does appear that shooting their totally scripted show made their already problematic marriage worse. For her part LeAnn made light of Eddie saying that doing the show screwed up their marriage tweeting:

LeAnn what’s funny is your response to his response. Drinking and tweeting again I see. LeAnn was insecure enough about her relationship to feel the need to tell us that Eddie was joking – that is sad.

“Other than being friends and two actors who were romantically intertwined in a movie-for-television we filmed last fall, there is no truth to the reporting initiated by US Magazine. It is a fabricated story that is using random snapshots as connective tissue to create a scandalous relationship.”

Well we all know how that turned out… right. Basically my Celeb Dirty Laundry friends, Eddie’s word means absolutely nothing, which can only lead to the assumption that recent reports that Eddie regrets ever being with LeAnn and wants to divorce her because she is an unhinged mental case who hides in her closet binge drinking (and only comes out to terrorize him with cheating allegations), are as true as the day is long.