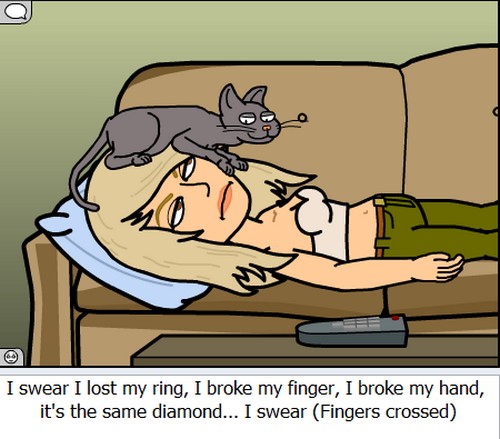 If you haven’t been following the mystery of LeAnn Rimes’ missing wedding ring let me bring you up to speed. The last time she was spotted wearing her original diamond wedding ring was in September while overseas. It was during this same trip that she injured her left hand when she punched a wall or a weight fell on it. She said her finger was broken then she said her hand was broken, but it all seemed very suspect because she was spotted using that very hand in ways that would be impossible if it was broken. Her hand was clearly bruised in some kind of accident, but I highly doubt it was ever broken – and this part of the story is important because she used her “broken hand/finger” as her excuse for not wearing her ring. 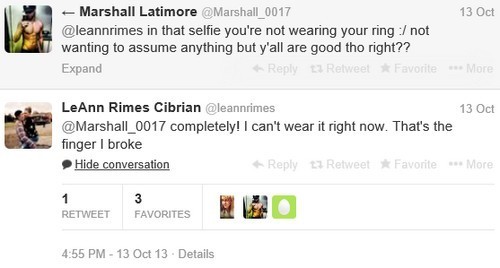 Nearly three months went by without LeAnn wearing a wedding ring, but then conveniently enough she on December 12th she tweeted her excitement at receiving what we now know is her replacement wedding ring: 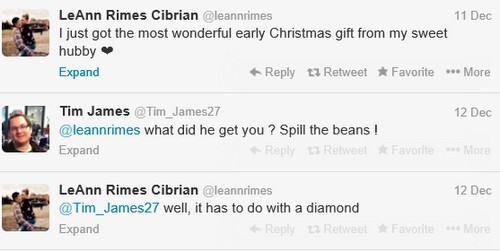 Oddly enough Ms. Rimes who normally will take a picture and tweet it if Eddie Cibrian so much as buys her a picture frame or card did not take a close up of her ring. This is probably because she wants people to believe that it is the same diamond and that her husband Eddie simply redesigned the band and close up pictures prove this is impossible. Here is LeAnn’s desperate attempt to convince her fans that this diamond ring is the same one:

There are so many lies in this little tweet it is hard to know where to begin. First off there she goes again confusing what she broke. Originally she said she broke her finger and now she is once again trying to act like she broke her whole hand *facepalm*. Second of all in three months she was not spotted wearing her wedding ring at soccer games, shopping trips, red carpet events … not anywhere. Also she does wear her ring on stage. This picture was taken recently at the concert she played at Grand Falls Casino in Iowa: 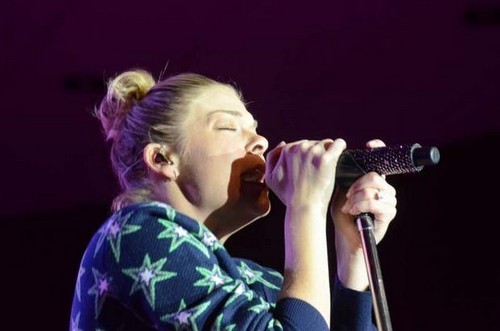 Originally she used to wear three bands which she said represented Eddie, Mason, and Jake. Now she has replaced the diamond and I do not doubt she will replace those bands as well.

The rumor is that in an angry rage she tossed and lost her ring, and I am inclined to believe it because clearly this new ring’s diamond is NOT the same diamond as her original ring. In the picture below the top picture is her original ring and the bottom is her new ring: 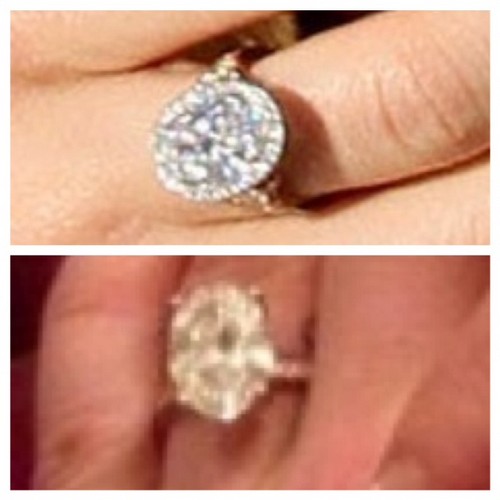 When others on Twitter noticed LeAnn trying to claim that these two diamonds are the same they pointed out how this isn’t possible. This tweet sums it up nicely.

@illlob36 There is no way that was the same diamond. Orig was flat unless diamonds stretch. This is a different overall ring. She wants her “fans” to believe that diamonds are elastic. The miracle diamond!

Another person pointed out what I was thinking, which was the fact that her excuse that they redesigned the band made no sense since this band is simple and standard whereas the original band was more intricate. @georgiesmom25 wrote, “Doesn’t look like a redesign. Looks like simple, basic setting for diamond before bride chooses setting,” and she is right. This band does look simple and basic – no design required – unlike her original ring which featured her 5-carat oval diamond set in rose gold fleur-de-lis connected to the band and was designed by Eddies friend Brent Polacheck of Polacheck Jewelers.

It is all so ridiculous because it would be non-story if she had just been honest, which I am beginning to believe she is incapable of being. Life happens, rings get lost. Hey I lost my original wedding ring while doing yard work – it happens. Her need to lie about it made it all very suspect and turned it into a story. In psychiatry there is a term for people who lie as much as LeAnn does –pseudologia fantastica – or simply put … compulsive liar.