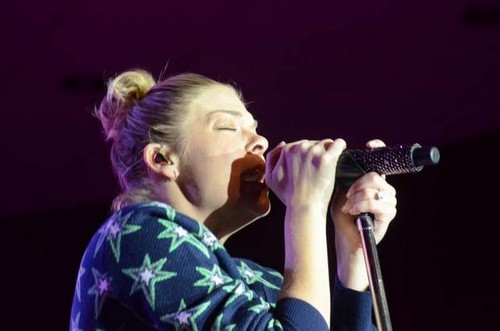 Nearly three months after the last time she was photographed wearing her custom designed 5-carat diamond oval shaped wedding ring, LeAnn Rimes was seen with a ring on her wedding finger at her concert at Grand Falls Casino in Iowa on Saturday, December 14. As we told you in a previous post – prior to this – the last photograph we found of LeAnn wearing her ring was taken on September 17th while she was overseas. 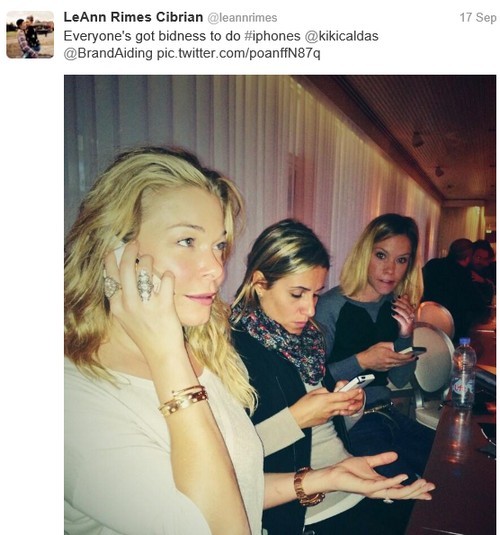 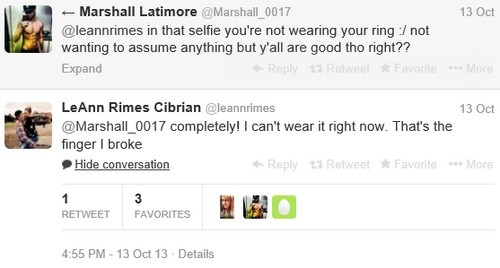 By the numerous pictures she posted of her bruised hand there is no doubt it was hurt, I do however question if it was ever broken because of the evidence that suggest that it wasn’t (such as dangling heavy bags from her supposedly broken fingers, or going to lift weights); however that is a moot point now because clearly even if it had been broken it is healed and yet for months still no ring.

For nearly three months she was photographed at soccer games, shopping trips, red carpet events, and even recently at the AMA’s and still no ring. Considering how proud she is of being married to Eddie Cibrian – obsessive even – and especially with all these rumors of an impending split it seems odd that she wouldn’t be wearing her ring if she did indeed still have it.

LeAnn would like people to believe that the tabloids and blogs are just making things up but the truth of the matter is the ring was MIA for months. What is a rumor is the why, the most consistent rumor is that while overseas she tossed it and lost it. The fact that she was last seen with it while in the UK does give validity to this report, I was just surprised she didn’t quickly try and replace it with a replica to hide this fact.

It may not be a replica – I cannot tell from the pictures – but it does appear that she got herself a replacement ring. On December 11th LeAnn tweeted that Eddie had gifted her with an early Christmas present and hinted that it was a diamond: 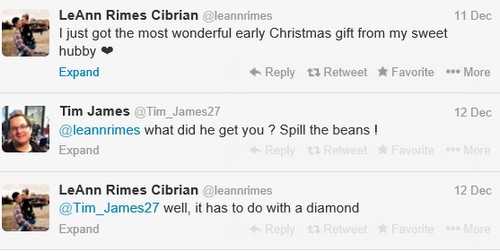 My first thought when I saw this was oh boy here we go … LeAnn is going to try and cover the fact that her ring has been missing for months by conveniently getting a new one. One word LeAnn – transparent. Although I think we were all expecting this. Back on November 22nd I wrote, “I bet she has placed an order for a replica wedding ring and is just awaiting its arrival which we will all soon see displayed on her finally healed never broken finger.” Well it seems that time is upon us because on Saturday LeAnn was photographed with a ring on her wedding finger, and on Sunday was talking to a Twitter fan about the new ring she was sporting: 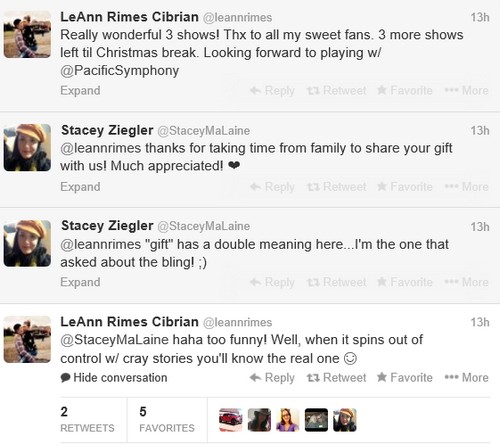 Of course the queen of displacing blame and spinning stories outright tried to blame the tabloids for the fact that she legitimately has not been seen with her ring in 3 months, and so yes it is very suspect that Eddie conveniently bought her a new one for Christmas. Of course. Spin away LeAnn but it isn’t some “cray” story that some writer thought up it is the TRUTH. She did not wear her ring since September and she said it was because of her broken finger – this is not speculation it is a fact. She may have replaced it with some new ring or a replica – maybe even a replica that is slightly different – but it doesn’t change what we all already know. But at the end of the day LeAnn only hurt her own wallet with this whole ring escapade because I think we all know that mostly out of work actor Eddie wasn’t the one shelling out the dough for a 5 carat diamond ring – not the first time and not this time either.

And in closing LeAnn looked like she put zero effort into her ensemble for her performance at the Grand Falls Casino in Iowa on Saturday, which is my way of saying I think she may have been wearing her PJ’s. She tried to blame the way she looked on her lack of hot water or something ridiculous like that considering she was playing at a Hotel Casino which I am pretty sure provides hot water for its guests. As a performer you need to be show ready and part of that is how you present yourself – so yes what you are wearing does matter to some extent. Anyways here was one concert goer’s critique of the performance left on the Argus Leader:

Didn’t enjoy her concert at all. Couldn’t understand her words while singing, she doesn’t even have the range anymore to sing like she used to. She talks too much about herself, and her outfit did not belong on stage. People come to see the whole package. I wouldn’t have paid to see her, but tickets were free. Just not worth getting out for. She needs a whole new concert line up too. Dissapointed big time.

For someone whose career has all but stalled – she is currently without a label, and she just recently released a video for her single Gasoline & Matches and it hasn’t even reached the iTunes top 300 country singles – you would think she would go out there and give it her all in an effort to prove to everyone that she still has it and is more than just tabloid fodder, but that just isn’t the case. 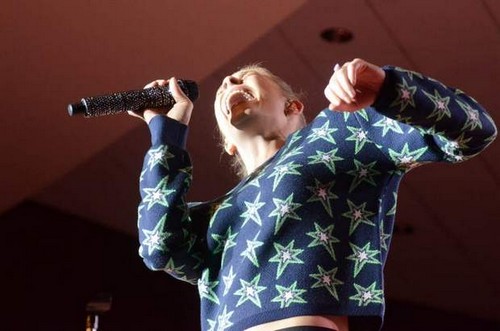