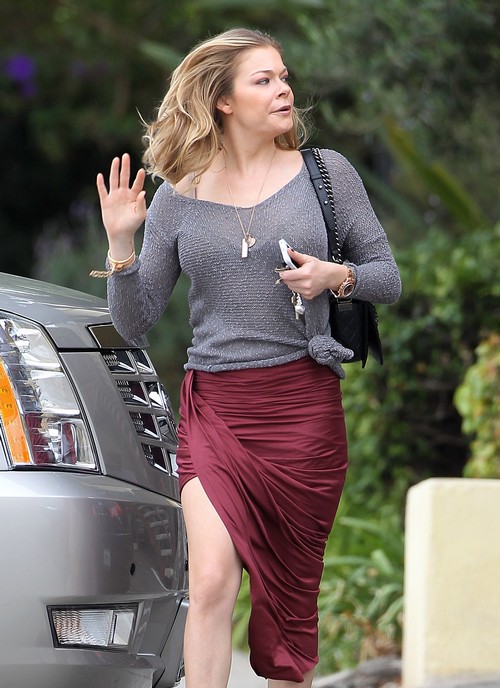 Many of you have commented here at Celeb Dirty Laundry and on other sites about the fact that LeAnn Rimes has been sans her custom designed 5-carat oval shaped wedding ring for over two months – and indeed she has so let’s explore this mystery that I like to call, “LeAnn and the case of the missing wedding ring.”

The last photograph that I found with her wearing her ring was from September 17h when she was overseas touring, or more appropriately cancelling concerts since this was the trip where she cancelled a concert after partying all night at a Dublin bar. 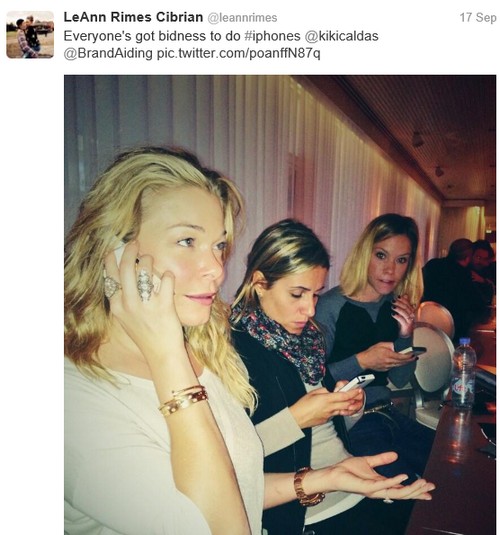 Two days later she tweeted a picture of her swollen hand which she later said she fractured after dropping weights on it. Ok LeAnn. Ok. 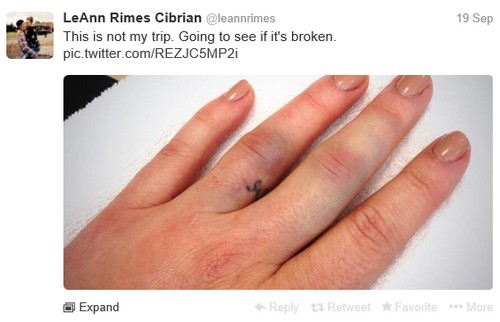 Was her hand injured? Clearly. Was it broken. Doubtful. She spent all day getting fitted for a splint she never wore, and was photographed with heavy bags dangling from that hand and those fingers. Not to mention the fact that on October 11th she tweeted, “I’m about to lift weights and dance and then wrq.” If her hand was broken as she was claiming, then why would she be lifting weights? The truth of the matter is that LeAnn complains about illnesses and injuries so often that it seemed like per usual she was just making a broken hand out of bruised fingers.

At this point whether her hand was truly fractured is just a moot point, because even if it had been it has clearly healed and yet she is still not wearing her ring. This my friends is things that make you go ummmmm because back on October 13th LeAnn wrote that she wasn’t wearing her ring because of her broken finger Lookey here y’all I gots me proof, and I do loves me some proof: 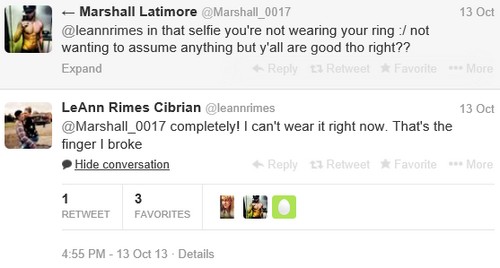 So where does this leave us … it leaves us with a healed hand and yet no wedding ring on her finger for two months which is highly suspect. It leaves us with the fact that she left for the UK with her ring but hasn’t been seen wearing it since. I highly doubt she isn’t wearing it because her marriage is on the rocks, because although Eddie is said to want out LeAnn appears as desperate to keep him as she was to get him. In fact I think her not wearing it gives more credibility to the stories that she tossed it and lost it during an epic fight with Eddie Cibrian while over yonder. What does surprise me is that Ms. Rimes who is very concerned with keeping up her happy marriage happy life appearance, hasn’t had Jeweler Brent Polacheck – who hand crafted her first ring – whip her up a replacement already. Although I bet she has placed an order for a replica wedding ring and is just awaiting its arrival which we will all soon see displayed on her finally healed never broken finger.

Oh and just a little FYI for all you folks out there unless your time is definitely not of the essence don’t even attempt to go back a month in search of a tweet on LeAnn’s twitter because it will literally take like an hour because this chick tweets that much. I learned this the hard way.