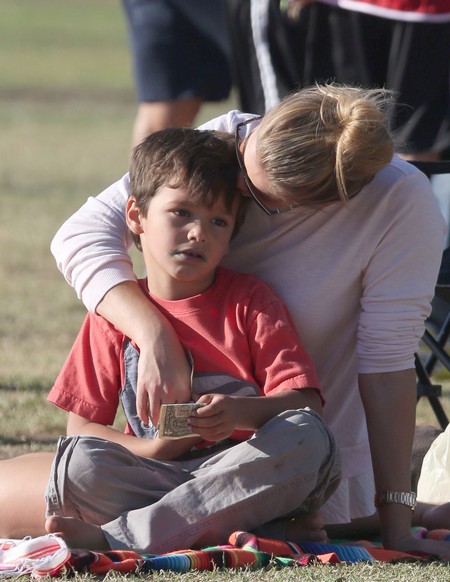 Another Saturday, another soccer game for Mason – son of Eddie Cibrian and Brandi Glanville, and another chance for LeAnn Rimes to prove just how pathetic she really is. LeAnn who is the queen of faking happiness, couldn’t even muster a smile for the paparazzi that she most likely called and begged to follow her. She did find time the time to try and smother Jake – Eddie and Brandi’s youngest son- with a choke hold like hug while likely whispering in his ear “be a good little bonus son and smile for the camera and I shall buy you whatever your little heart desires.”

It appears her bribes of money and material only work with Eddie because Jake who always has a smile on for his mom looked sad and irritated. It doesn’t take a body language expert (although I consider myself an unlicensed one if that means anything to anyone), to see that Jake felt uncomfortable with his evil step-mothers public and overbearing display of affection, as he noticeably pulled away from her. That picture didn’t just expose Jake’s distaste for his step-mom, but quite possibly proves that she lied about breaking her hand (or was it her fingers? She keeps changing her mind on what it is she broke) because not only was she without her splint (again) but she was putting a substantial amount of weight on it. I suspect the broken hand/finger is just another one of her fictitious ailments, which means we can add Münchausen syndrome to her possible mental disorders. LeAnn spent the rest of the soccer game comforting herself by stuffing her puffy face.

LeAnn has had a busy week on twitter – because really what else does a washed up singer have to do – sending out passive aggressive tweets aimed at her ex Dean Sheremet, as well as her usual target Brandi. She also took a lot of flak this week for tweeting how cute it was that Jake was singing the song Spitfire which is a hate filled song that is said to be about the little boy’s mother Brandi and includes lyrics like, “Reckon it’s ‘bout time I bury you. Better find some friends to carry you. Oh to know you is to loath you.” 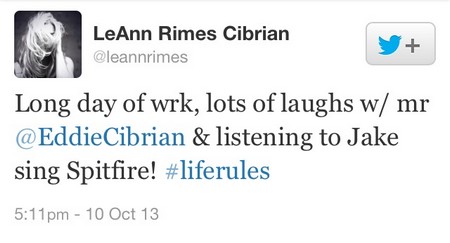 If – and that is a big if – he was singing that song it is probably because she plays in on repeat at home as a form of punishment. No one, especially little boys are rocking out to that song willingly. Fact.

This tweet should not have surprised anyone because it was not the first time that LeAnn tweeted about how much the boys love the songs she wrote about her affair with their father, and about her hatred for their mother. Back when her flop of an album was released she tweeted how they liked to sing Borrowed – which was about “borrowing” their dad Eddie from their mom Brandi. By the way I know that LeAnn never completed school past the 8th grade so the correct definition of words is much too complex for her, but borrowed implies that you asked for and were given permission which is not what happened when she was sleeping with a married man. Bless her poor uneducated heart.

After the soccer game it appears that LeAnn went home to self-medicate with alcohol because soon she was getting into twitter wars like this one: 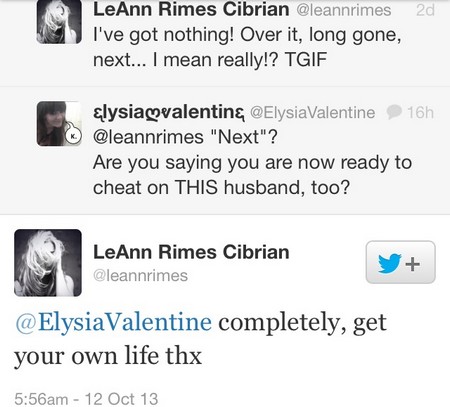 By the end of the night Ms. Rimes was three sheets to the wind and drunk tweeting again. First she inadvertently tweeted a blank tweet, which was followed by a lame (I know how you love that word LeAnn) drunk selfie that was just …. Sad. 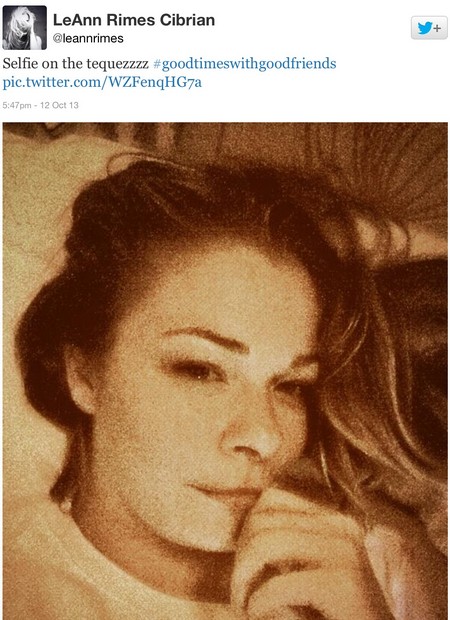 LeAnn was never as successful as the Carrie Underwood or Taylor Swift’s of country but there was a time she was liked – or at the least tolerated. But that was then and this is now. With each tweet she reveals her true colors and it ain’t pretty. On twitter there is a whole army – The Smiley Army – whose main goal is to raise money (and awareness) to help Kim and Lexi Smiley the mother and daughter that LeAnn is foolishly suing. In the process they have gathered a whole arsenal of evidence that shows LeAnn for who she really is – a hypocritical, narcissistic, manipulative, vindictive, and jealous washed up singer who thinks nothing of hurting other people and destroying lives. A great way to start redeeming herself in the eyes of the public would be to drop the frivolous lawsuit, and begin respecting Brandi – who is the mother of Jake and Mason for life, unlike LeAnn who is only their step-mother for the duration of her marriage to Eddie. Simply put, get help LeAnn. Seriously get help.