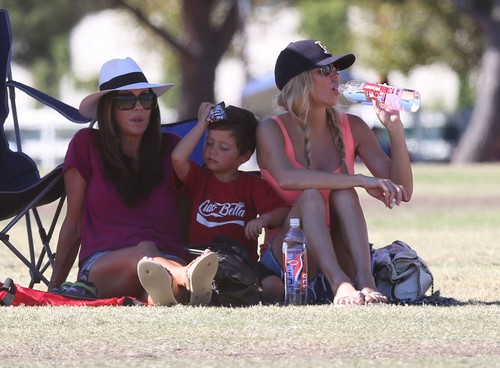 LeAnn Rimes and her man Eddie Cibrian headed to a soccer game to see Eddie’s son Mason Cibrian play.  Seems like a normal family day, right?  Wrong, nothing is ever normal where crazy LeAnn is concerned and in this case who just happened to be at the same soccer game was Eddie’s ex Brandi Glanville.  So while Brandi went to see her son play soccer like a normal Mom, LeAnn posed and smiled and had her, “Look at me,  face on.”

You just know that Eddie’s poor kids Mason & Jake have to know what is going on between LeAnn and Brandi.  Understandably, as any little boys would, Mason and Jake are supporting their Mom.  They hate seeing her upset and know LeAnn is the cause of all their Mom’s sadness.  Although LeAnn and Eddie were at the game Eddie’s son Jake kept hanging around his Mom Brandi and supporting her. He walk over to see Eddie and LeAnn but only so LeAnn would not have one of her meltdowns.  Poor little Jake sitting with LeAnn looked like it was the last place he wanted to be and LeAnn looked bored out of her mind.

Brandi recently told Bethenny Frankel on her new talk show, “It’s the worst pain… you think your heart’s broke after you get a divorce — wait until there’s a girl and she’s tweeting pictures [of your kids] saying, Look at my family!”  Think about how Jake and Mason feel about this?  No surprise they are not huge fans of LeAnn.

Meanwhile, LeAnn who stalks everything Brandi’s does decided not to keep it classy (no surprise) and went on twitter and tweeted the following to Brandi’s statement.

Can you imagine what LeAnn is going to say about Brandi when LeAnn’s new reality show, LeAnn & Eddie airs on VH1?  Do you think these two are ever going to able to call a truce and move on with their lives?  My guess is with LeAnn involved, no way!!!

Some photos of the Saturday, Sept 28, soccer game with Brandi and her kids looking like a loving family while LeAnn appears as the plump Sasquatch she has become.