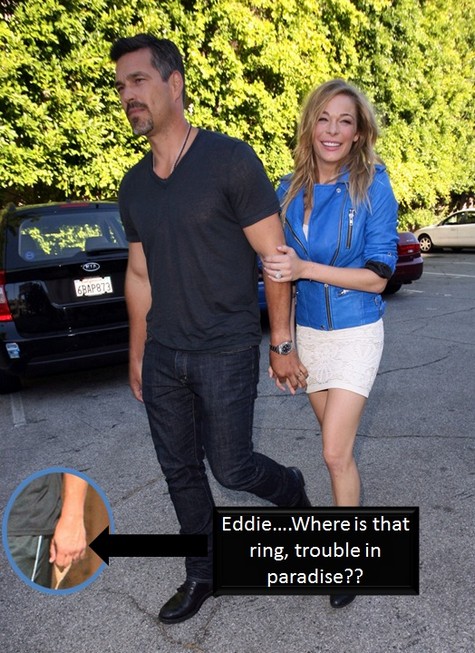 Are things on the romantic rocks for LeAnn Rimes and Eddie Cibrian? Maybe. Eddie Cibrian was spotted roaming around Los Angeles this weekend with one extremely naked ring finger. So, we have to ask, what’s up with that? Perhaps these two have purchased their one way, first class tickets to Splitsville? While rumors and speculations are flying around Hollywood and the web, a source close to the couple says that the thought of LeAnn Rimes and Eddie Cibrian separating is an absolutely bogus notion.

An unnamed source for E! News confirmed that the couple was in fact together all weekend, and not only were they together — but they were smiling and happy together as they palled around with Eddie’s kids. The couple was also spotted at Katsuya in Glendale on Saturday. They, allegedly, weren’t seen stabbing each other with their chopsticks, so we’re betting on the fact that trouble hasn’t invaded their paradise.

“They seemed to have a great time and talked a lot together,” the source tells E! Perhaps they were sketching out the terms of their divorce?

With rumors of Eddie being a cheater, and with many nasty home-wrecking conceptions of LeAnn still drifting through the air, it’s quite clear that the romantic energy between these two is too much for the world to handle. But is all this emotional turmoil just fiction, or should we be legitimately concerned for the fate of this infamous Hollywood couple?

Anxiety-ridden and stressed out singer, LeAnn Rimes, also canceled a concert last minute on Friday night after claiming she’s suffering from a “massive infection,” presumably caused by an emergency root canal she had in July. Is this the truth, or is this just a way for her to cope with some tragic relationship turmoil?

Let us know what you think of these speculations in the comments below. To Eddie’s defense, when the picture was taken of him without his ring on, he was wearing workout clothes. So perhaps he just took it off for . . . a second.