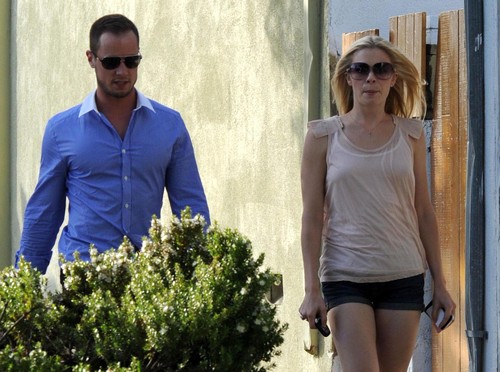 In 2009 when LeAnn Rimes and Eddie Cibrian decided cheating on their spouses qualified as “ain’t no thang,” they started a drama that is still going on today (mostly because LeAnn can’t stop tweeting, talking, and singing about it). There has been one player who has managed to stay relatively quiet and cordial through it all and that is LeAnn’s ex-husband Dean Sheremet. Yes I know, no one is perfect, but Dean is about as perfect as you can get in a situation that is about as ugly as it can get, so when he engages you know it is probably valid and serious. Even gentlemen know when enough is enough.

It all began with a tweet (because when it comes to LeAnn it always begins with a tweet ) in which someone joked about the days when she was just a chubby country bumpkin married to a gay dude, and what did Ms. Rimes do you ask … well she laughed *facepalm*. 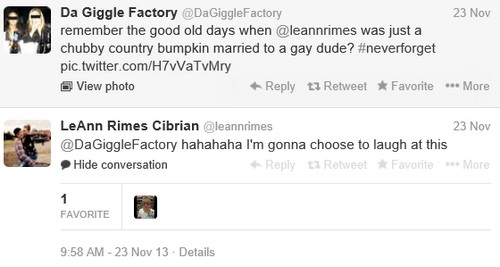 Obviously Ms. Rimes never learned that sometimes no response is better than a dumb one. If this tweet had just been about her being a chubby country bumpkin then laughing would have been fine, but it was ALSO about Dean being called gay. LeAnn loves to engage so of course she responded, but what she should have said is something like, “that picture is pretty funny of me WTH was I wearing, but from now on let’s leave Dean out of this he doesn’t deserve false accusations,” or something to that effect.

Dean took to Twitter to express his disappointment at his former wife laughing at someone joking he was gay writing the following two tweets:

Bravo Dean. Bravo. If LeAnn was not going to the admirable thing and stand up for Dean she should have ignored the tweet all together. When Dean and others called LeAnn out on her inappropriate tweet it gave her a chance to do the right thing and apologize, but LeAnn doesn’t do apologies she does excuses. She wrote, “… dear Lord I was laughing at myself,” which is clearly not the case since the joke was NOT just about her. She followed up with this tweet which is as much of an apology as we are going to get out of Ms. Rimes:

What this incident highlights is the fact that LeAnn who aligns herself with anti-bullying campaigns and has posed for the NOH8 campaign which is a, “charitable organization whose mission is to promote marriage, gender and human equality through education, advocacy, social media, and visual protest,” is herself a bully and also thinks it is funny when people call others “gay.” This is particularly important because LeAnn likes to portray herself as both a victim and advocate for anti-bullying and yet daily – I mean daily – interacts and encourages those who spend all day bullying, while also doing her own share of bullying on her verified account and likely her countless pseudo accounts.

And in a related note… Sunday we saw the AMA’s and LeAnn, who just put out an album is not there. Maybe she should have kept, “that tape over her mouth,” because the consumers have heard her truth and quite frankly didn’t like it. Not to mention she alienates and attacks people every day – people that could be potential fans and consumers. It boggles my mind that someone whose livelihood depends on having a likability factor insist on being so unlikable. At this point it is going to take one hell of a PR team – or a miracle – to resurrect LeAnn’s image and career because she is a walking talking singing tweeting PR blunder.