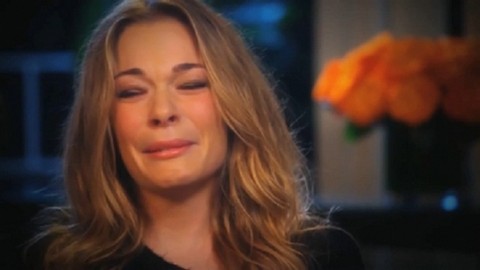 It is official LeAnn Rimes has come undone. She regularly takes to Twitter to engage in arguments, but today she took it to the next level and quite possibly exposed the truth behind her secret Twitter accounts that she and her friends use to bash Brandi Glanville. There is a Twitter account @irene_sybil which sole purpose appears to be to praise LeAnn and bash Brandi. LeAnn interacts almost daily with @irene_sybil, as does the same group of LeAnn supporters – always to talk ill of Brandi. In fact just yesterday LeAnn, @irene_sybil and one of LeAnn’s supporters were talking yet again about the night Brandi had her embarrassing wardrob malfunction and taking the time to zoom in on the picture because apparently they have nothing better to do and are perpetually stuck as teenagers.

It has been said that LeAnn creates fake accounts so that she can bash Brandi and will even interact with these fake accounts to make them look legit. She was even called out by ex-husband Dean Sheremet when she used one of her previous fake accounts –wewenlove- to tweet how happy she was to be celebrating her one year anniversary with then boyfriend Eddie Cibrian, and he tweeted her saying something to the effect of, “you should be proud seeing as you were married to me at this time last year.” She immediately closed that account and has since opened probably countless others.

On November 21st @irene_sybil was tweeting endlessly about their obsession – Brandi – this time going on and on about how Brandi is the reason for the decline in the Real Housewives of Beverly Hill’s ratings. @irene_sybil produced some graphs showing a decline in ratings which does not prove anything since anyone with any knowledge of science and statistics knows that correlation does not necessarily imply causation (guess those statistic courses I took in college were good for something after all). Awhile later someone posed a challenge for @irene-sybil, saying right now LeAnn is onstage if you are not LeAnn tweet something … and was met with crickets … not only did @irene_sybil not respond right away but never again on this thread. Here is the actual exchange: 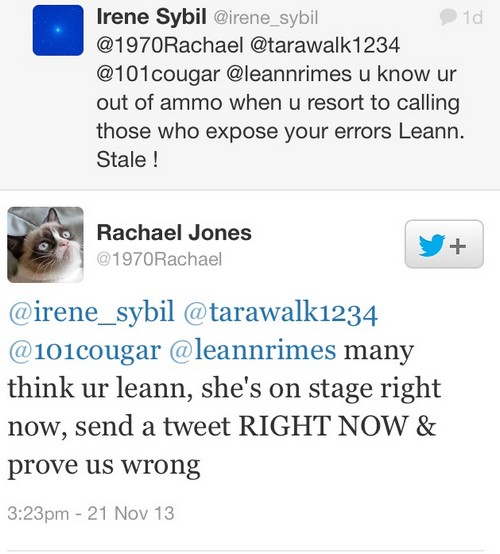 The next message on this thread came much later from @BarbLovesBB who innocently enough just tweeted how she thought that was a good challenge only to have LeAnn attack her and condescendingly put her down for NO reason: 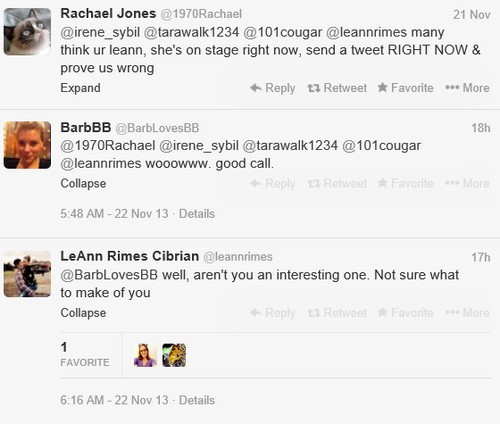 You see @BarblovesBB has the initials BB in her twitter name because she is a Big Brother fan/commentator which you can clearly see on her bio, but Ms.Rimes thought the BB stood for what she and her supporters call Brandi’s supporters – Brandi’s Bi***es or BB for short – and so this is why she attacked @BarblovesBB. Understandably @BarblovesBB was taken aback because she didn’t write anything mean directly to LeAnn, but LeAnn just continued to put her down: 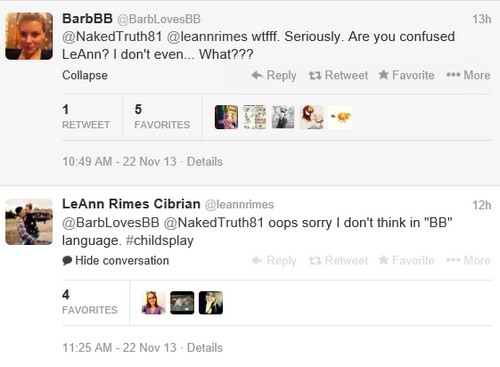 Wow LeAnn just keep digging that grave … are you that insecure? Are you that unhappy? I have seen you engage countless times but this takes the cake because this person didn’t directly even insult you – you were insulted by the BB in their name and twitter handle which was for BIG BROTHER. Of course when LeAnn realized her mistake she felt stupid and blocked @BarblovesBB because she is immature like that (hey note to LeAnn if you keep blocking and attacking us consumers who is going to left to buy your CD’s or tickets to the next county fair you play at – think about it). @BarblovesBB who had to have someone explain to her why LeAnn attacked her over the BB in her name because she was unaware of the whole Brandi Bi***es thing wrote, “dude. what a moron. we have bios for reason. *facepalm*.” Well said Barb. Well said.

One person suggested that LeAnn who does seem to have a hard time keeping track of her lies might have meant to tweet this mean message from one of her other accounts but messed up and this is not out of the realm of possibilities. What is particularly funny about this exchange is that just a day before when someone told her to stop responding to negativity she wrote (in part), “lmao it’s a rare occasions that I do! …” Now it is my turn to lmao because it is NOT a rare occasional, and now she is even responding to and attacking people that aren’t really saying anything that bad. But perhaps it is like LeAnn has been trying to tell us … she is just certifiably crazy. She said it about a month ago on twitter and did so once again today when she said there just ain’t no cure for her kind of crazy and if that is the case get off of Twitter and get some help. Seriously. Like now. 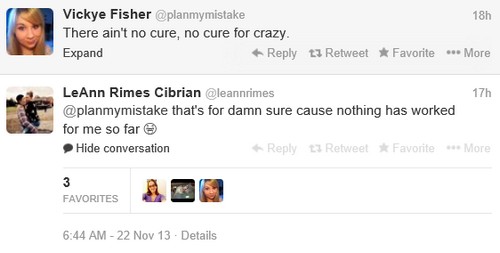 LeAnn who we now know from her home-wrecker/child stealing jokes has a twisted sense of humor will play it off as sarcasm but I said it before and I will say it again… there is always an element of truth in sarcasm. Always.

UPDATE: We argue above that @irene_sybil behaves as if it were a proxy for LeAnn – what follows adds weight to our argument. LeAnn has attacked CDL and this author on Twitter twice before – so this latest salvo comes as no surprise.

@irene_sybil – the twitter account set up for the purpose of bashing Brandi Glanville has responded to my article with this:

And then insinuated that I didn’t “have the guts” to print her response: 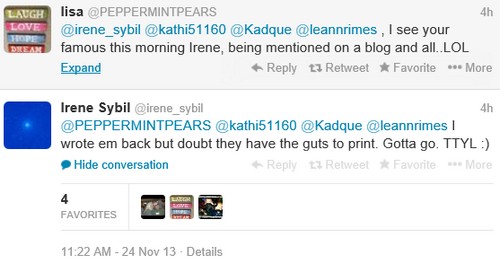 Wrong “Irene Sybil,” I do have the guts, but really no courage required as your response was lacking to say the least. First of all you DIDN’T deny that you are in fact LeAnn, all you did was post yet another link to an article about how RHOBH ratings have been declining – which was not what my post was about. My post was about the fact that LeAnn is suspected of creating fictitious accounts so that she can bully and bash Brandi, and that @irene_sybil appears to be one of those accounts. This account goes silent when LeAnn is onstage (and couldn’t rise to the challenge when someone said “hey LeAnn is onstage if you are not her tweet right now”), but tweets manically about Brandi otherwise. My post was not about the show RHOBH it was only mentioned because it was a lead-in to the rest of the story.

What is interesting with LeAnn is that you need look no further than her own Twitter to get evidence to support many of the claims that have been circulating about her.  One of LeAnn’s friends did call themselves the “Sybil” of Twitter in the past (yup you know who you are) so it would not be surprising if this account (@irene_sybilis) is in fact one of LeAnn’s or one of her friends’. What is a FACT is that LeAnn, who claims to not be a bully or condone bullying, regularly engages and encourages @irene_sybil to bully Brandi.