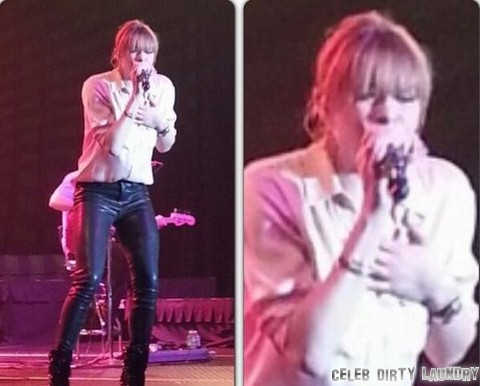 It appears as if LeAnn Rimes has done something forbidden: taken off her wedding ring. A reader of CDL sent us the above picture of her at a performance and, as you can see, the singer definitely isn’t wearing a wedding ring of any sort. Wonder if she just forgot to put it on (though, why you be taking it off, gurl?) after getting ready for the show. Or, maybe, all the drama sparked by the dirt in Brandi Glanville’s tell-all book unleashed an onslaught of crazysuace onto LeAnn’s shoulders, so much that she’s just has had enough with everything and everyone.

Apparently, the picture comes to us from a concert this past weekend, and the message sent said, “You notice she wasn’t wearing her wedding ring?”

There are so many odds and ends to this drama triangle that it’s hard to even gossip about it at times. The feud-triangle between Eddie Cibrian, LeAnn Rimes, and Brandi Glanville has to be one of the most volatile drama hubs in the Celeb World, and I’m quite surprised they have kept it going on for this long. I mean, wouldn’t all that moaning and groaning and cat fighting with manicured claws get tiring after a while? I don’t know for sure, but I’d imagine it would get super taxing.

Do you think there could be trouble in the relationship because of Brandi’s constant attacking and pounding? LeAnn also might have had enough with Eddie, enough to take off her ring and make a statement, because she’s sick and tired of him mooching off all her money and fame. While we’re still unclear as to what has motivated LeAnn to remove that ring, the source of Brandi’s bitterness has never been shady: she, to put it simply, has never truly gotten over the fact that LeAnn stole Eddie right from underneath her nose.

Why do you think LeAnn is picture without her ring? I mean, it’s clearly not there. What does this mean for the future of LeAnn and Eddie? Brandi Glanville just might have won the war and accomplished what she set out to do in the first place: destroy Eddie and LeAnn’s relationship for good.