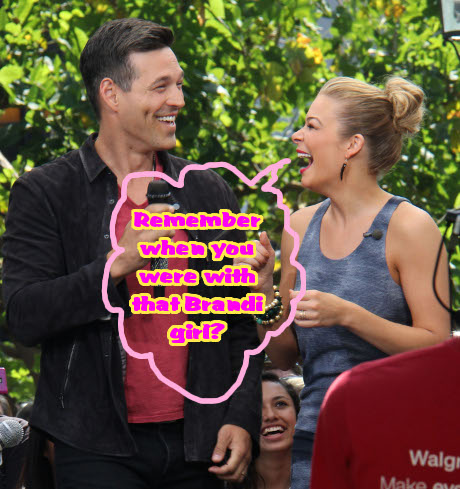 Will pigs have to fly or hell freeze over before arch-rivals LeAnn Rimes and Brandi Glanville cease their bickering? Eddie Cibrian cheated on his wife and married the mistress (LeAnn) but how much longer do we have to continue to listen to these two grown ass women talk about each other? Get a life and move on if not for your own sake for the sake of the children.

According to RadarOnline: LeAnn Rimes ditched her undies to talk to Chelsea handler about her favorite topic – her husband’s ex-wife Brandi Glanville and why they “don’t speak”.  She said: “When everything you do or don’t do becomes a tabloid story how can you actually co parent?”

The only reason we have to continue to endure the bitter feud is because the Grammy award-winning singer/songwriter released her new album, SPITFIRE, on June 4, 2013. I guess it’s true what they say, any publicity is better than no publicity — so the public’s interest in this tangled love affair will hopefully make Rimes relevant again in the music industry.

Brandi is no better than Rimes, exclusively telling In Touch her thoughts on LeAnn’s new album stating “LeAnn has a great voice, but she needs to work on her songwriting,” snipes Brandi. “I’m surprised it’s so bad.” “If LeAnn wants her career back, she needs better lyrics. These are the worst songs I’ve ever heard. No one wants to listen to this!” Both of these ladies really need to grow up and act like adults. However Brandi may have a point about the album and its content.

Rimes SPITFIRE covers a range of emotions prominent in her life — everything from anger to love and from frustrations to letting go, which means the entire album could be about Brandi. Please let us know whether or not you’re tired of hearing about Rimes and Glanville. Should both women just shut their traps? Or do they make you feel superior and of a higher intellect?