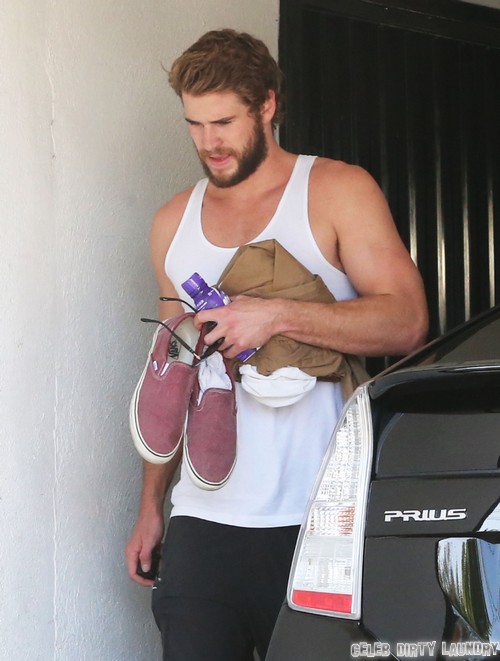 According to a new report from Gossip David, Liam Hemsworth ditched Miley Cyrus to go have a guys’ night out partying with Kellan Lutz of all people.

Seriously, dude? Why can’t he go spend time with Jennifer Lawrence or Josh Hutcherson, or his family, or his FIANCE?

Anyway, there aren’t many details available about Liam’s night out, but sources tells Gossip David that he was spotted at a booth with Kellan and some friends. I guess they could have easily met through the Young Hollywood circle, especially since they’re both supporting stars of major young adult franchises. And neither are, shall we say, the most verbose actors around. But still, Liam is miles ahead of Kellan, both in terms of not famewhoring and acting ability.

Sources also add that Miley Cyrus was conveniently missing from the group, but what else can we expect when Liam was apparently so miserable being seen with her on the Paranoia red carpet? I feel bad for her, because it’s obvious he is SO over the whole relationship and just wants to move on. I have no idea why they’re still ‘together’, unless it was some sort of professional agreement or she has some dirt she’s threatening him with. Because anyone who looked THAT miserable with someone should not be engaged to that person! And sources say they’re still trying to ‘work things out’, but partying with a bunch of people at bars and clubs instead of spending time with your girlfriend doesn’t exactly scream ‘trying to work things out’.

What do you guys think of Miley and Liam’s relationship? Dead in the water or are they still fighting for it? And do you think Liam partying with Kellan is a good idea, or should he be spending as much time with Miley as possible? Let us know your thoughts in the comments.