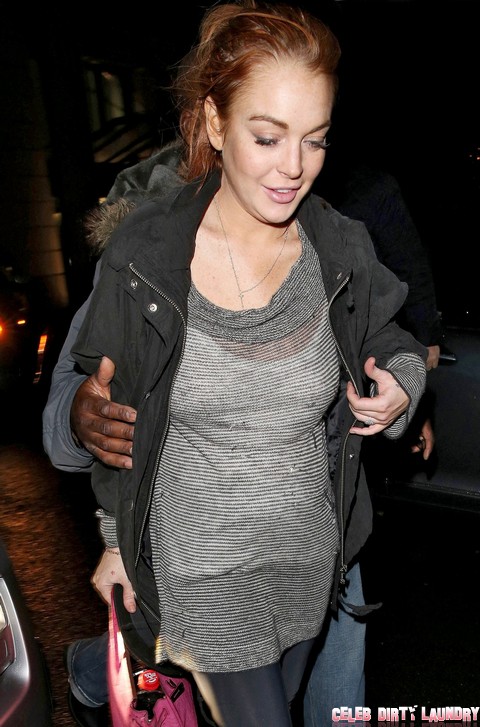 I’ve never put much stock in the whole “27” curse, but every time I look at Lindsay Lohan – now age 26 1/2 – and how ragged and progressively worn out she looks, I’m starting to believe. Perhaps 27 is the body’s tolerance limit for alcohol and drug abuse… Lindsay will be 27 on July 2nd and if her bloated and exhausted condition over the holidays in London is any inkling of what’s to come, she’ll be lucky to make it to 27 at all!

The 27 club is more for musicians than actors but Lindsay has been known to sing occasionally. The most recent inductee into the 27 club was Brit crooner Amy Winehouse whose body just gave out after years of excessive and very public alcohol and drug abuse. At this point, it seems like throwing Lindsay in the slammer over her recent probation violation may be the only thing that will save her life.

Back in the mid-late 90’s and early 2000’s, Robert Downey Jr‘s life was spiraling out of control – he bounced in and out of rehab (sound familiar Lindsay?) and jail. LA County Judge Lawrence Mira dropped the hammer on him and sentenced him to three years in jail saying, “This is a person who is suffering from a disease he can’t control. Even the dire threat of jail or prison is not enough of a deterrent.” The judge said jail was the one thing that might save his life and he proved correct. After nearly a year behind bars, Downey was released, immediately checked himself into rehab and since then has been on the straight and narrow.

Rehab doesn’t seem to be enough to stop Lindsay’s self-destructive behavior, but maybe time in an orange jumpsuit doing prison chores may give her the wake up call she so desperately needs! She’s had four stints in rehab but none seem to have taken. With Lindsay’s family background, it’s no wonder that she’s screwed up and needs help, but at 26, it’s no longer Dina Lohan or Michael Lohan‘s fault.

Michael’s been ranting to RadarOnline that he’s got the cost of rehab covered for her and an intervention team that includes famed addiction specialist Dr. Drew Pinsky ready to help her. But instead of getting real about her addiction issues, Lindsay has headed inexplicably to the UK. Actually, there is an explanation – I think she’s there to do Celebrity Big Brother (along with has-been reality tools Spencer Pratt and Heidi Montag.) Lindsay says she’s not doing the UK reality show, but come on – the girl is broke. Her assets have been siezed by the IRS, yet she can afford to fly herself and her train wreck mom to London, is wearing a new fur coat and shopping up a storm at Harrod’s. I’ve got little doubt she’ll be in the Celeb BB house.

Dina is no one’s idea of a sober companion for her troubled daughter. She was drunk (and/or high) on Dr. Phil this fall. Dina denied she was drunk during taping, but one glimpse at the video tells a different story. And now she’s side by side with Lindsay as she staggers around London looking puffy faced, inebriated and exhausted. If the Big Brother house was alcohol free, it might be a good place to lock her up, but the franchise relies on booze to get the best footage from the C and D list “celebrities” it features. If she does appear on the show, I predict we’ll see her boozing and floozing it up with the worst of them.

One thing’s for sure – looking at Lindsay’s alcohol bloated face – it’s not hard to imagine her lying in a coffin rather than a luxe suite at London’s Dorchester hotel. Can someone get this girl some help? I’ve got my fingers crossed for a stiff jail sentence – and not one of those three hour jail term turnarounds that Khloe Kardashian were blessed with. Like Robert Downey Jr, I think the only thing that can save Lindsay now is time behind bars! If she doesn’t follow Downey’s path of jail to sobriety, she’s no doubt on the Amy Winehouse path to untimely death!