Are Lindsay Lohan And Miley Cyrus Lovers: Hook Up Together After Drug and Booze Fueled Partying? 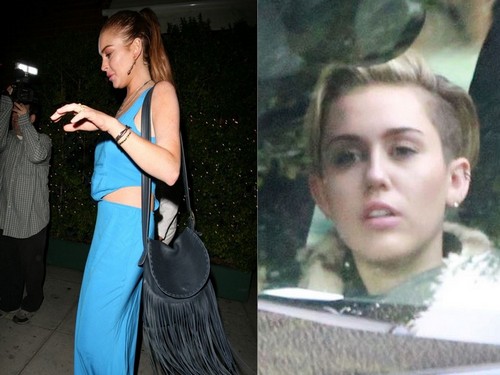 It was recently reported and confirmed that Miley Cyrus and Lindsay Lohan had started partying together, which is definitive proof that Miley’s more out of control than we initially thought. You don’t willingly party with Lindsay Lohan unless you want your life and career destroyed, and Miley either doesn’t realize that or she doesn’t care.

Right now, sources will only confirm that Miley and Lindsay were at a club together when Lindsay approached Miley at her table. It seems the two hit it off, and they reportedly left the club together at 5 A.M. after partying all night. And what did they do after they left? Well, if I was making an educated guess, I would say they went to someone’s house and snorted cocaine for the next few hours.

I mean, what else would they be doing apart from getting drunk and doing drugs? Getting to ‘know’ each other? I wouldn’t even be surprised to find out that they started hooking up, especially since Miley doesn’t seem to have any reservations about increasing the sexuality of her image and Lindsay will do anything to get back in the media spotlight. Hanging out with Miley and hooking up with her is a perfect way to do that, and besides, they would be in such a haze of drugs that they probably wouldn’t even know what they were doing.

Will anyone stop Miley before it’s too late and she gets stuck down the rabbit hole that is Lindsay Lohan’s vortex of doom? First of all, even if Miley’s public reputation has taken a massive hit lately, her career is still doing very well. She’s always stated that her career is her #1 priority right now, but if she continues hanging out with Miley, that will soon be at huge risk. Anyone who hangs out with Lindsay Lohan regularly becomes a liability to investors, and Miley can’t afford that, not with her reputation going down the toilet with the public.