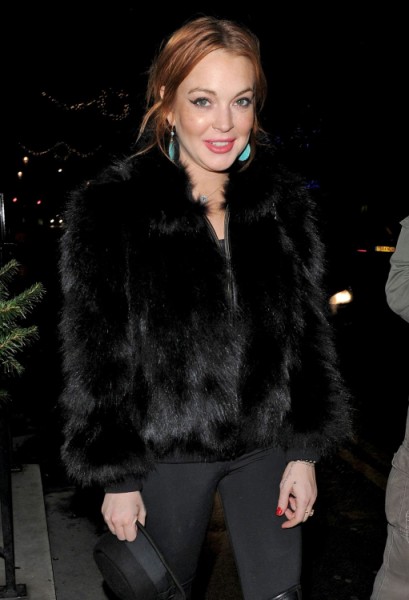 But at least she’s working, right? Right? No? Well, fine then.

Lindsay Lohan’s in the news again but this time it’s not for slapping someone, getting rushed to the ER or screwing up another movie set. Instead, Lindsay’s questionable dating habits are coming under fire and by her loser dad no less.

Michael Lohan made himself relevant again this week by telling Star magazine that his oldest daughter is getting pimped out by his ex-wife, Dina Lohan. Apparently Lindsay’s getting paid to “date” rick men for a few days during which time the dudes pay for all the expenses including jewelry and other trinkets. Who are some of Lindsay’s best clients, you ask? I guess Prince Haji Abdul Azim of Brunei paid $100K to get her ass to London for New Years (we were wondering how she afforded that) and Spanish-American painter Domingo Zapata lets Lindsay live in his penthouse at the Bowery Hotel in NYC for free as well as his L.A. pad at Chateau Marmont.

Yes, because rich, entitled men love giving money away to washed up stars for nothing in return besides their pleasant company. Michael Lohan’s not saying prostitute but he means prostitute, right? Why else would these guys put up with her crazy ass if they weren’t getting some ass in return? They want to tell friends they banged a movie star and Lindsay consoles herself by saying she’s dating them and that’s why she sleeps with them. Guys gift the girls they’re banging all the time, right?

This is just another situation of the world seeing something one way and Lindsay seeing it as quite another. You don’t believe me? You think all these stories about Lindsay and her screwed up life are just made up? Do yourself a favor and read this recent NY Times piece. It is worth your time. One of the best parts is the fact that she rents a Porsche to drive herself to sets. Stupid biotch, just economize and buy yourself a Honda. But please don’t come away from it feeling sorry for Lindsay Lohan. Prostitute or not, she had the world at her fingers and she pissed it away because she’s indulgent and lazy. Why clean yourself up? Why turn your life around? Why get help when men will use you and afford you a trashy lifestyle? She’s gross.

Do you believe the Lindsay Lohan/professional escort story? Can you see her having sex for favors?