Lisa Vanderpump Eliminated From Dancing With The Stars 2013 Season 16 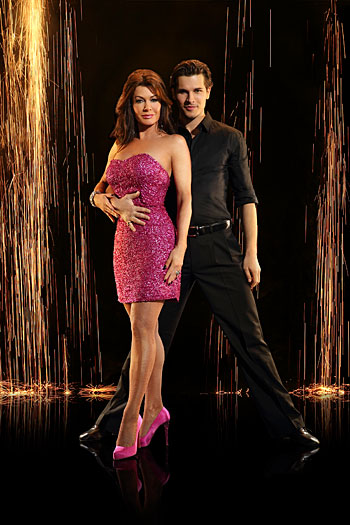 Tonight on DANCING WITH THE STARS restaurateur, designer, author, philanthropist, producer and television personality Lisa Vanderpump and her professional partner Gleb Savchenko were the second contestants sent home on the second Result Show of the season.  Did you watch tonight’s episode?  We did and we recapped it here for you!

On the premiere episode Lisa performed a Foxtrot for her first dance and the judges were not overly impressed.  This is what the judges had to say.  Len: “It wasn’t exceptional and there was too much staggering about. Lift your ribcage”  Bruno: “She couldn’t sustain her posture, but the lines were good.”  Carrie Ann:” The dance suited her, but she was out of sync a little bit.”  They scored Lisa a 18/30

On the second show Lisa danced the Jive.  This is what the judges had to say.  Len: “It was a bumpy ride, it was a bit wooden and a bit shaky.  Not brilliant.”  Bruno:  “It is understandable, you are not use to this.  You have to contain and place your movement.  You have to finish it cleanly.”  Carrie Ann:  “First Gleb watch the lifts!  You held yourself with such refinement it makes your dances go well.  But you have to let lose.”  They scored Lisa 18/30.

On the third show Lisa danced Viennese Waltz and the judges had this to say about her performance.  Judges’ Comments: Judges comments:  Len: “It was light and breezier, free and easy.  There was an air of lightness, you have to work on your posture and foot work.” Bruno:  “It was like watching Empress Josephine, you are much more  at ease, much better, but you missed a few passes.  It is not constant.  It was better.”  Carrie Ann: “I love watching you.  You have to stay in character, excellent, nice job!”  They scored Lisa a 21/30

On last night’s show Lisa danced a Cha Cha Cha and the judges had this to say about her performance. Judges’ Comments:  Len said, “You have been poorly, you gave it your best shot.  For what you have been for, you did a great job!”  Bruno said, “There are a few mistakes but you are under practiced.  What you did you did well.”  Carrie Ann, “I wish you had more time to do practice.  Gleb lifts this is your second warning.  You have potential.”

Sound off your comments below and tells us what you think about Lisa’s DWTS experience.  Do you think you Lisa should have been sent home?  Check out the video of her performance last night below!