BY Cate Meighan on April 2, 2013 | Comments: one comment
Related : Scandal 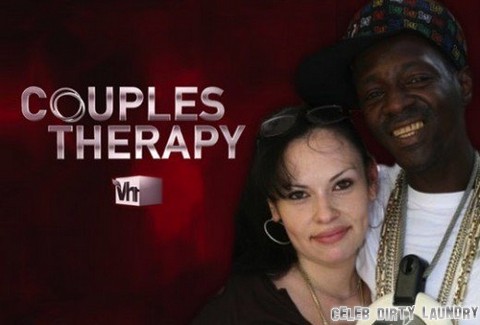 Have you ever seen Flavor Flav in action on television? He is as childish as the come and when he doesn’t get his way that tends to lead to a huge temper tantrum on Flav’s end. It’s no wonder he and fiance, Liz Trujillo have signed on for a season of Dr. Drew’s Couples Therapy.  She is choosing to put up with a little boy and there has to be something wrong with her to stay with this clown for years.

Liz and Flav also did an episode of Celebrity Wife Swap last year and it was hard to tell exactly what, besides a young son, was keeping them together. He spent the day playing with toys and chicks while she dumped the baby on a nanny and spent her day doing puzzles and reading self-help books!

Anyway, yesterday Liz was rushed from the Couples Therapy house after hours of acting erratically. The rest of the cast insisted that she took too many pills and that caused her mental and physical collapse. After the fact she is claiming it was a simple issue of exhaustion, because that’s always what sends D-listers to the hospital. Liz claims all of this fixing things with Flav is just draining and at least that much I can believe.

Perhaps being stuck together with no toys or puzzles to distract Flav and Liz is not fixing things but rather making them really hate each other. Maybe now that Liz has been forced to actually be with her man she feels absolutely stuck in a life with him and that overdose wasn’t exactly an accident. I’d probably be tempted to eat my Xanax rather than spend a few weeks with Flav too!

Liz has said that VH1 is hyping the whole situation to get publicity for the show. I have to wonder if they are covering up a failed suicide attempt. Tell us your thoughts in the comments below!