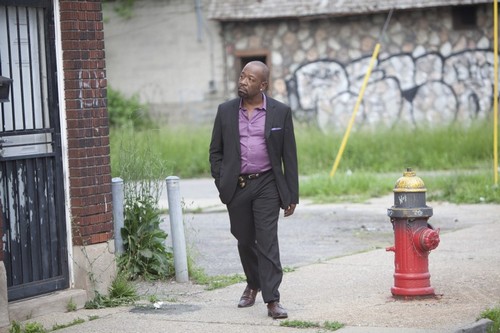 Tonight on AMC their new gritty, edgy and provocative crime drama, LOW WINTER SUN returns with their fifth episode called. “Cake on the Way”.  On tonight’s show Damon has to pay the cost of his ambitions.  Did you watch last week’s episode?  We did and we have a full and detailed recap here for you.

On last week’s show Frank and Geddes work to cover up evidence in McCann’s murder; Damon’s crew prepares for the Blind Pig opening.

On tonight’s show the DPD’s investigation intensifies when a low-level murder is linked to McCann. Meanwhile, Damon has to pay the cost of his ambitions.

I am enjoying the show but so far reviews are mixed.  Tonight we are 1/2 through the season and I am hoping that AMC gives it another chance and renews it for a second season.  However, numbers are not great and they are deteriorating week after week.  What do you think, do you find the show too dark?  Too graphic?  Let us know!

I am so excited for tonight’s fifth episode, it looks like it is going to be a great new show, which you won’t want to miss. So be sure to tune in for our live coverage of AMC’s Low Winter Sun Season 1 episode 5 — tonight at 10 PM EST! While you wait for our recap check out the sneak peek video below of tonight’s episode!

RECAP:Damon is walking with his crew and talking about really stupid crap and they make fun of the guy who’s hand got fried in the hot oil; they go to a butcher and ask for a double on the meat they are purchasing. They all go to a diner to eat some breakfast. Damon then goes and gives Maya some breakfast in bed.

Joe and Frank are arguing about boxing while they are inspecting the house where Billy died; he then calls Frank over to see something. Joe then says it looks like they found Brendan’s murder site; pointing out a sink in the house.

Charles makes the scene and Joe then sees Simon and isn’t happy to see him, Dani tells them that they believe they have found Brendan’s murder site and that he could have popped into that house. Joe then offers to go pay someone a visit; Charles sees a friend walk in and gives him something. They got him a boxer’s robe and they all take a picture with him, Joe heads to see Darrell; he starts finishing the bible passage that was being said. Darrell then says that he knows nothing much of Billy; Joe tells him not to insult him. Darrell then tells him about some deals that were going down; he mentions how Billy was doing some sketchy work with some Greeks. Shawn visits Maya at her bar; Damon asks how he is and then Shawn asks to talk to Maya. Damon then tells Shawn that it’s his bar and they don’t fix up low lifes like him. Shawn then goes to attack Damon and is slammed against the bar; Maya asks him why Shawn visited. Maya asks where he’s staying and he’s being sarcastic about it all, she hands Shawn something and he asks how she’s doing. He calls her pretty and then puts his hood on and walks off.

Frank is out for a smoke and asks Dani if she got anything; she says things seem to be off with the hole thing and questions him smoking thinking he quit. She then grab a cigarette and smokes with him, she talks about her parents and Frank mentions how he never met his. Dani asks if he believes Brendan was killed in that house, he tells her it’s a lead and it’s the best they got. Maya is talking with Nick and he mentions how Shawn looked much worse then last time they saw him. Simon is talking with Dani and Frank about the crime; he then tells them they are welcome to see him any time. Damon tells his men to keep up some good protection around the club. Shawn comes knocking on Frank’s door and he lets Shawn into his house. Shawn tells him he likes his place; Frank asks him why the hell he’s there. Shawn then mentions seeing his ex and was stared down and treated like crap; Joe walks in and asks why he’s there. Frank hands Shawn some money and Shawn leaves; Joe then mentions he had no idea they were still in touch. Frank says it’s nothing like that and the two start working on the crime together.

Joe and Frank are talking about different times and how Billy could be tie in with Brendan’s death. They are talking about great possible scenarios for the two meeting and dying; they are making a cover story that makes Brendan also seem like a hero cop. Frank says he’s worried about Dani because she’ll be all over the logic of their story; Joe tells him how his dad was a fighter. Joe then repeats they’re drowning and Frank is looking for some lint. Frank then starts shouting that who ever got Billy was a killer and he has no problem taking them out; he then tells Joe they are trying to force this to hard especially with Brendan being a hero. Frank eats the last slices of pizza, Joe says they should make a story one last time. Frank and Joe announce their story to the board and they say they believe that Brendan was killed by Billy and an accomplice who then shot Billy at the end. They are indicating that Brendan was a corrupt cop and they have to find his killer to figure out the three homicides; they go to the press with their story.

Frank goes to see a boxing match of one of his fellow friends and members at the gym he spars at, he at the fight with Joe, Charles and Dani who are cheering with him. Dani starts talking about the job at the fight and Frank tells her that’s exactly what bad detectives do and tells her to just enjoy the fight. Mata goes to visit Damon at his little club. Frank’s friend is just nailing his opponent and wins by KO. Maya asks if she’s just some delivery girl; Damon is being really jealous about her seeing Shawn at the bar. Maya then slaps Damon and he slaps her back, she tells him he has a problem and do not hit her. Joe tells Frank if they can get away with it all then it’ll be a good week for them both; Dani then says she enjoyed herself to Frank and goes to give him a kiss but he denies it hard. She feels awkward and gets in her car and drives off; Simon visits a bar and sends a drink to the woman at the end of the bar. Damon and Maya are having sex in a back room at the club but people are running out, there is no cops and his partners turned on him. They tell them to put all their guns on the bar, they tell Damon to go with them. All the gang members are leaving and one of Damon’s crew members just pulls out a gun and fires off some shots. Michael got hit in the stomach though.

Damon and his crew are rushing Michael to a hospital; Frank is at the office just looking through some important documents. Simon is at the remains of the house that Frank and Joe burnt down. Michael is in a lot of pain and is having trouble speaking. Michael is asking Damon to please to drop him off at the hospital and he can make it, the two just stop the car and Michael is telling them to look at him. They don’t answer him or look at him, Michael just dies in the back seat of the car.